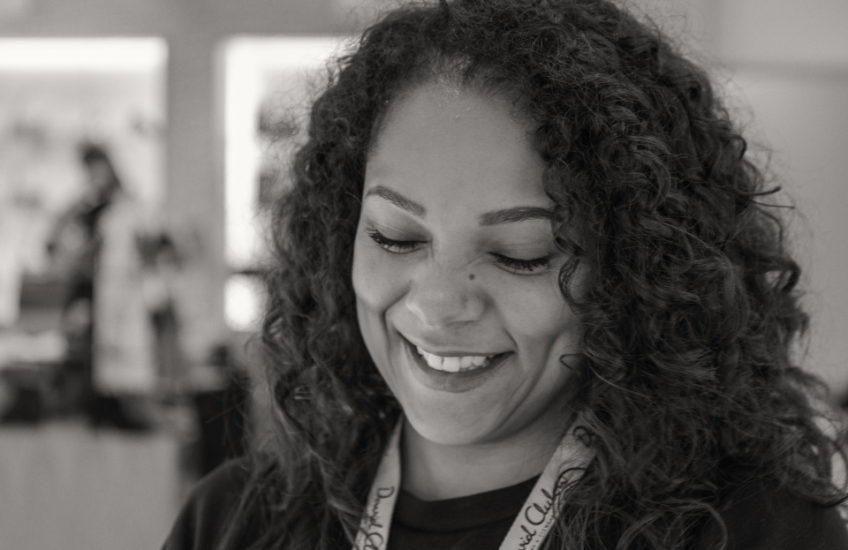 R and I took ourselves off to the Touchwood shopping centre in Solihull today, to buy a few things such as iPad cases, sheets and drinking glasses. And coffee and cake, natch. I also took advantage of the trip to visit the sunglasses section in John Lewis to replace my lost RayBans, and was served most efficiently by this charming and very attractive young woman.

While she was polishing my glasses and finding a case we were chatting idly about my plans for the rest of the day, which led to a discussion of photography and blogging. I said that I photographed whatever caught my eye during the day – “For example it might be you today,” – and she laughed and said that she didn’t mind if I wanted to take her photo. So I did – though not well enough to do her justice, I fear, because I always get nervous doing this kind of instant portrait shot, which of course means that I don’t take enough time to adjust the camera settings and tend to fumble it. So it’s not pin-sharp, and I’m annoyed with myself about that – but she was so nice that if she sees it I hope she doesn’t object too much.

This evening I’ve been setting up my iPad, and discussing with R the best way to sync various things across to it, some from the PC and others from the Mac, without sending my entire eworld into a flaming tailspin. At points I started to feel as though my eyes were crossing with the effort of all the virtual spatial awareness, but I now at least have A Plan. As to whether The Plan will work, only time will tell – but if it doesn’t I daresay you’ll be hearing about it.

And finally, in a move which I’m going to describe as “TOO LATE”, the Council has today installed a dog poo bin on the verge opposite our house. Sixteen years after we first arrived here with Arthur (who was actually quite partial to that particular piece of verge), and six weeks after he departed the planet. I’m thinking of hanging a sign on it, dedicating it as:

Maybe they’re trying to tell us that they think we should get another dog….?