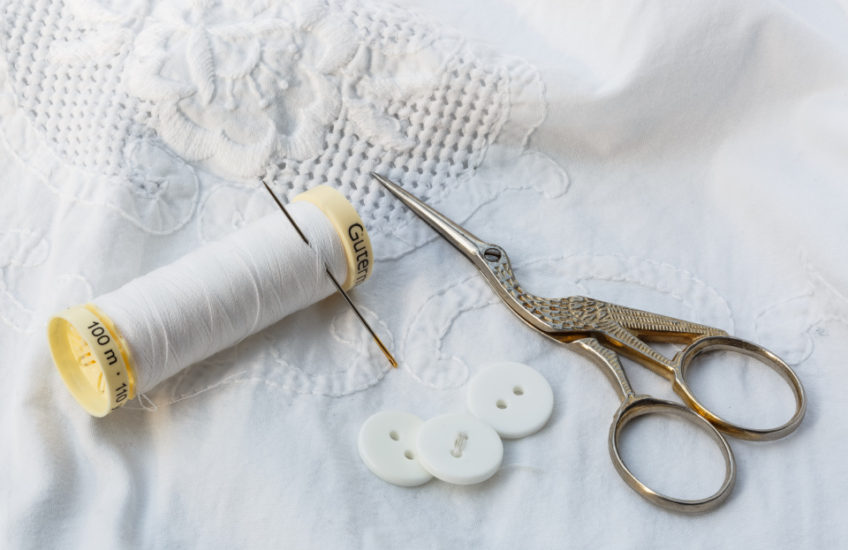 These buttons, waiting to be sewn back onto a duvet cover, were all pulled off in the washing machine – though not in one freak, cataclysmic incident.  I like to save up little repair jobs such as a lost button, until there are so many lost buttons that the garment, or duvet cover, can no longer be fastened; at which point I stamp around, complaining furiously about the necessity to be constantly sewing, stabbing myself in the finger with the needle and bleeding profusely all over whatever it is so that it then has to go straight back in the machine again. And so the cycle of fun repeats itself.

This morning I decided that if I had to sew, at least I’d feel better about the situation if I got a couple of photos out of it, and that it would make a change from the dark stuff I’ve blipped over the past few days if I posted something bright. I probably need hardly tell you that I spent several times as long taking photos and processing them as I did stitching on buttons. This is a five-shot focus stack.

In answer to your questions:

1. No, I didn’t make the duvet cover myself – though I probably could have, if I’d set my mind to it. I began my secondary education at the kind of girls’ grammar school presumably favoured by our Leaderene, at which we were taught vast amounts of English grammar and needlework, but nothing horrid and masculine like science. It was a bit of a shock to me when I later moved to a city comprehensive school and discovered that the correct answer to “Please take these pieces of electrical equipment and connect them together appropriately so as to achieve a working circuit,” was not “I’m sorry – I’m afraid I can’t help you there. But if you want any smocking done, or a nice drawn-thread work tea tray cloth making, I’m your woman.”

Owing to a lifetime’s devotion to the work of Tom Lehrer, and a burning desire throughout my teens to slaughter almost everyone I knew, I rapidly got to grips with Biology and Chemistry, and in fact took both to A-level – but Physics still remains largely mysterious to me. I’m pretty good on light and the properties of lenses, which is useful (at least until someone starts boring on about hyperfocal distances, which induces instant catatonia), and I get Newton’s First Law (handy when it comes to not driving into stationary objects), but my understanding of electricity pretty much ends with it being a Bad Idea to lick your finger and stick it in an electric socket.

Education definitely isn’t what it used to be. Oh for a return to the good old days!

2. No, I don’t intend ironing it. I’ve had the iron out once already this year, and it’s not due for a return appearance till next spring.

Right – I’m off out to choir, Have a good evening, peeps.