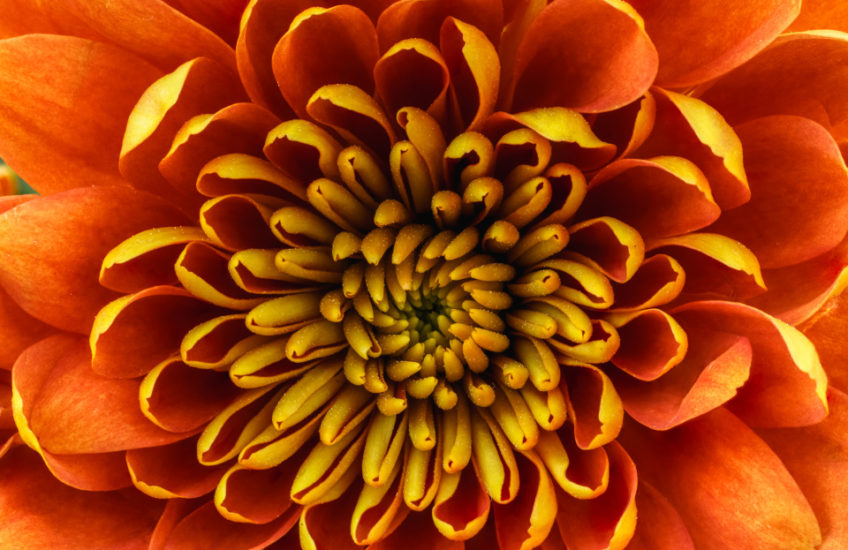 I zoomed off to Stratford this morning to do various bits of banking, and on the way home stopped at Waitrose to pick up some flowers. I decided on chrysanthemums and alstroemeria in autumnal colours, and though having grown up on Monty Python I’m still unable to set eyes on a chrysanthemum without experiencing an almost unconquerable desire to go Gumby, I managed to restrain myself until I reached the privacy of my own kitchen.

This is just the centre of a bloom which in total measures about 3cm across. Because I was so close to it the dof was extremely shallow even at f/18, so I stacked seven shots to get this image.

In other, exciting news: R having almost worked out his notice at the salt mine, having therefore to return the company iPad, and deciding that he needed to buy one of his own, felt that it was only fair to buy one for me too – and I got home from Stratford this afternoon to find that they had been delivered. As I was busy focus stacking, and then going off out to BGCC, all I’ve actually done with mine is open the box and admire its sleek beauty – but I’ve been slightly alarmed to note that R (who knows his way around these devices pretty well) seems to have spent more time setting up his than I spent on my iMac and iPhone combined. Tomorrow I think I’m scheduled to be quite busy, and may be posting a photo of an Apple cable.

And in other, even more exciting news: we seem to have acquired some lodgers in the wild garden. There are several large heaps of rotting bark chips down there, left by the tree surgeon the last couple of times he came to call and due to be spread as mulch when I get round to it, and for the past few weeks it’s been obvious that something has been digging at least experimental holes in them. Today R took me down to the large compost heap where he dumps grass cuttings, and (presumably the same) something has excavated right into the middle of it – in the process throwing out a large amount of beautifully composted loam, which I must use at the first possible opportunity.

What the Something might be I can’t be sure, but my best guess would be foxes. I’d like to do a night watch to find out, but it’s really scary down there after dark, and I’m a big wuss – so that’s not going to happen. My second thought was to wonder if we could set up some kind of remote camera there and monitor it from the house – but even if we had the equipment I doubt we’d keep it for long: the gardens in this village receive occasional nocturnal visits from two-legged wildlife of the light-fingered variety, and having already lost a metal garden table I’m not especially keen to contribute camera equipment to their Christmas fund. So I’m not sure how I’m going to find out who our lodgers are: I’m still pondering the question, and any suggestions will be at least politely entertained.