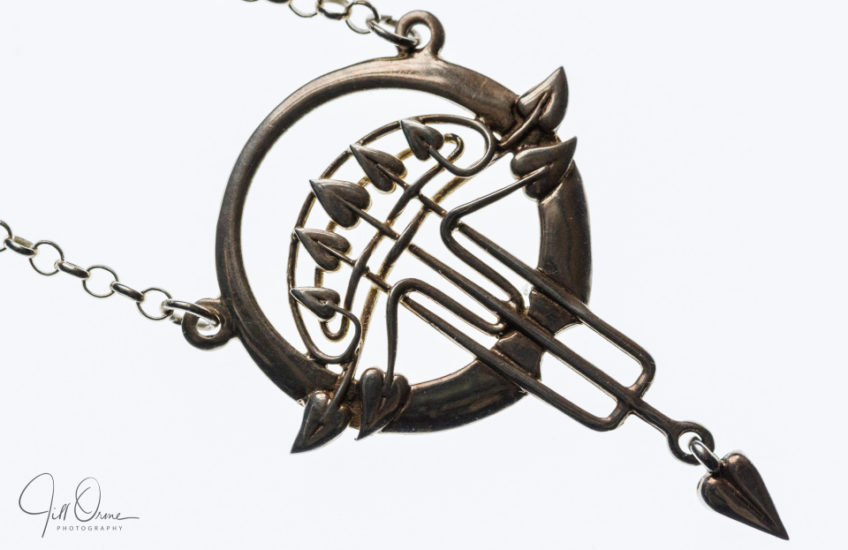 A few years ago I used to spend quite a lot of time looking at, and sometimes buying, bits of vintage jewellery on eBay. I don’t do this any more (I mean, duh! – lens fund!), but that’s just as well because I wound up with far more pieces than my usual wardrobe of jeans, sweater, and boots permits of me wearing. Back in the spring when R and I were going off to Amsterdam, I thought that it would be nice to take a necklace to wear on my holibobs, and on rummaging around in my jewellery box I found this one – which I confess I had only the vaguest recollection of buying. I know that it wasn’t expensive, partly because it’s not hallmarked (and therefore can’t be accurately dated) and was sold as white metal, and partly because it’s not quite 3cm across the widest point of the pendant, and is quite fine and light.

I’d bought it for the design, which speaks to me of the Secessionist end of the Art Nouveau spectrum, but when it arrived I thought that it was probably too delicate for my substantial frame, so I’d put it in with my other necklaces and forgotten all about it. But having fished it out again and put it on I found that it’s a piece that really works, sitting very neatly and nicely just at the top of the sternum, and perfect in the neck of a blouse. So it came to Amsterdam, and now it’s having some more attention here.