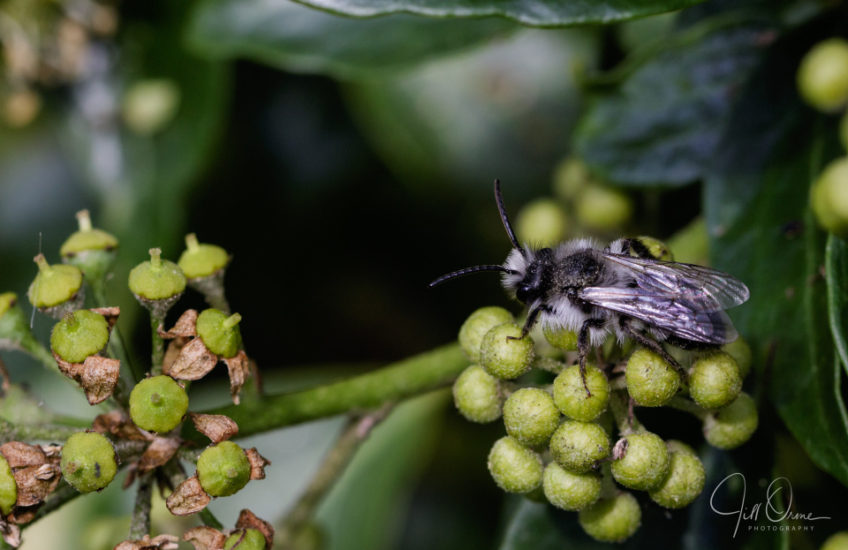 I seem to be going down with a virus – probably the same thing that R has had and which brought on his labyrinthitis – and after a bad night last night I woke up this morning feeling very sorry for myself. Luckily I’ve been able to cheer myself up through the day by thinking about L and G, whose engagement was announced on Facebook this evening to a heart-warming clamour of congratulations from friends and extended family.

I spent much of the day slumped at my desk, catching up on some admin and some back-processing (and with my temperature going up and down like a yo-yo), but in the middle of the afternoon I did take myself off out for a walk around the village. The mystery of the out-of-season Ashy mining-bees has now deepened, because as well as about half a dozen at the hedge where I photographed them on Sunday, I found three more at a different site about 300 metres away; they could, I suppose come from the same disturbed nest as the first group, but in my experience these bees are very territorial and don’t stray far from where they emerge.

I would like to ask the bee people if it’s at all possible that the species is becoming double-brooded – but it probably isn’t, and I don’t want to sound silly. But from some very typical nesting behaviour I saw today it does seem that the females in this late group are trying to dig out burrows in which to lay eggs, and provided they can find enough food to stock up the cells, there’s a reasonable chance of the nests succeeding – especially as the Nomada bees which parasitise Andrena nests are now long gone. They may also be helped by the fact that a spell of warm weather is forecast, which could allow them to fly for at least another couple of weeks.

Most of the ivy hedges are now starting to go over and are looking quite rough and untidy, but I liked the contrast of that with this fresh and very dapper little bee.