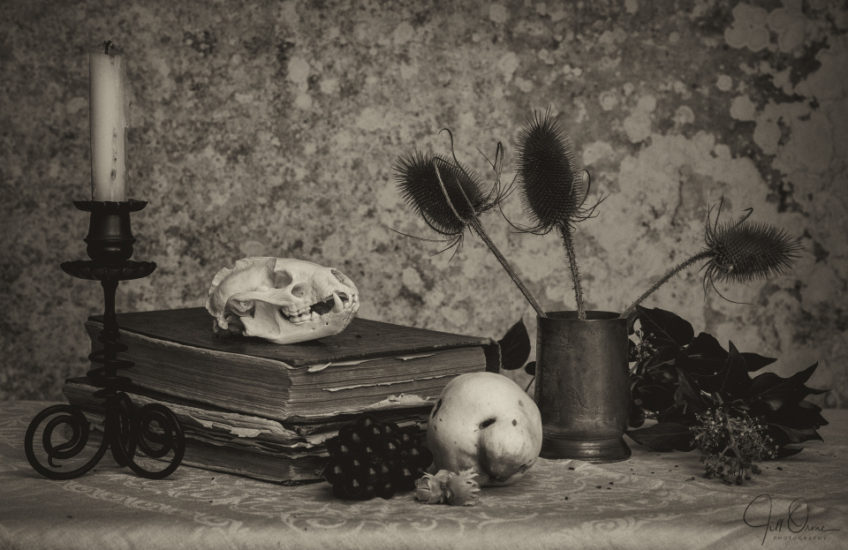 When I told R, who’s been feeling offish again for much of the day, that the vibe I was going for here was entropy, he suggested that I could just photograph him instead; however when I pointed out that this would require me to kill him, his enthusiasm for the project seemed to wane. He really should know better by now than to put ideas into my head. In the event he was able to help by managing to stand more or less upright and hold the backdrop for this set-up, which made it a relatively quick job for me to rattle off a few shots – and that was just as well, because by the time I got around to photography today it was nearly dinner time.

I’m now able to share with you a piece of news which we received yesterday under a publication embargo, which is that Child One (The Animator) and her lovely young man G (The Statistician) are engaged to be married. Much of this morning was spent on messages and phone calls and conversations related to this happy state of affairs – about which R and I are so happy we’re both semi-permanently grinning like Cheshire cats (though he’s slightly bemused about the fact that his little girl seems to think she’s old enough to do something so grown-up).

In the middle of the day I spent an inordinate amount of time trying to send L and G some flowers, completely messing up the on line order, discovering from the order confirmation that the flowers were booked to be delivered here, having a conniption fit, and finally doing what I should have done in the first place and picking up the phone and calling the florist in Cardiff, to get the situation untangled and the bouquet despatched in the correct geographical direction. At which point I was ready for a nice lie-down in a darkened room, but instead I had to go to Stratford to run a little clutch of errands. By the time I got back R was up and about, though listing slightly, and more chatting happened…. until I realised that evening was approaching and I’d done nothing about this photo, and started scooting around frantically, collecting dead and dying things to go in it. In keeping with the vibe, I’ve beaten the file half to death in Nik Silver Efex Pro – but I’ve also put the basic colour edit in as an extra. 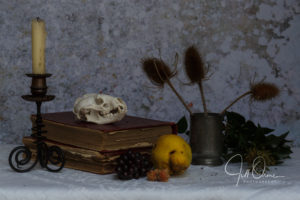 This evening R and I have both spoken again to Child One (and R has also had a brief chat with Child Two, who, as ever, is working). The good news from Cardiff: the flowers have arrived. The bad news: they’re going to need a bigger vase.