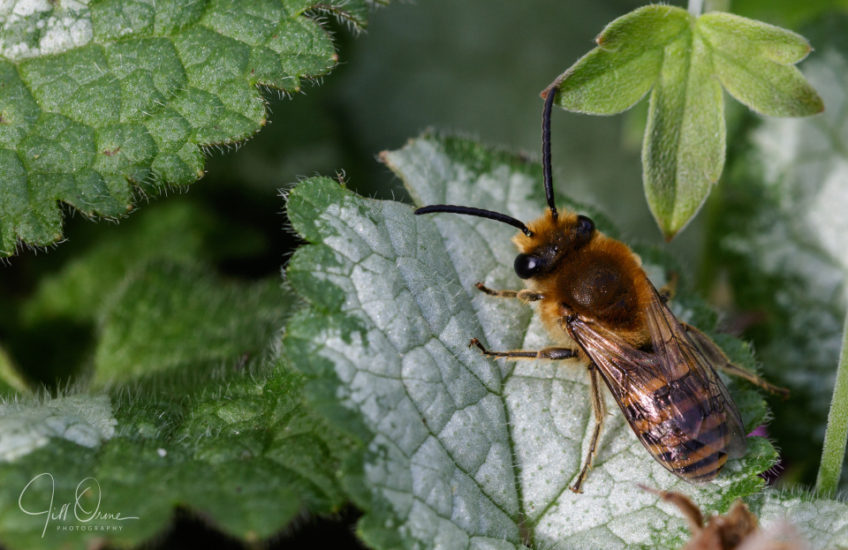 I’m genuinely not grumbling about our weather – that would be grotesque, given what’s currently happening in the Caribbean and in Florida – but it’s been quite stormy here, and I didn’t manage to get out for a walk until half way through the afternoon. I made straight for the south-facing ivy hedge at the end of the village, and was rewarded by the presence of a gorgeous Comma butterfly. Having bagged quite a few shots of that, I walked the rest of the parish without really finding much at else to photograph – it seemed as though most bugs weren’t liking the strong wind and frequent showers, and had hunkered down somewhere to wait for quieter conditions.

As I was walking out of the butterfly-free butterfly field I spotted a Small White, nectaring on some geraniums in a garden which is only separated from the footpath by a low retaining wall. I went over to photograph it, and as I approached I realised that there was a cloud of small bees zooming around the same flower bed, looking superficially like honey bees, but behaving quite differently; and as soon as one settled within range of my macro I was happy to confirm my suspicion that they were beautiful fresh ivy bees (Colletes hederae). I spent the next ten minutes or so kneeling on the pavement snapping away at them; they all looked to me to be males, and were flying in a way that suggested they were on patrol for the arrival of the first females.

This species was first described as recently as 1993, and has been steadily colonising the UK since its arrival here in 2001. It’s the last species of solitary bee to emerge each year, its arrival coinciding with the autumn flowering of the ivy whose pollen is its larval food. Mated females dig out burrows in which to lay their eggs, the preferred location for which are sandy banks (causing me to wonder what has possessed them to colonise this bit of Worcestershire, where the soil veers between sludge and concrete, depending on the rainfall level); the individual burrows tend to be sited close together and can form quite large nest sites. Given a reasonable autumn, the adults can fly through September and October and even into November, but then they will die and the pupated larvae will remain under ground until the following autumn.

There’s a fact sheet about Colletes hederae here, and a BBC article here. I’ve added a photo of the Comma as an extra. 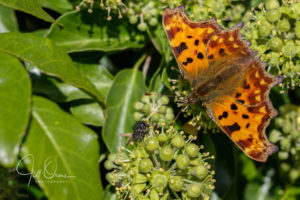