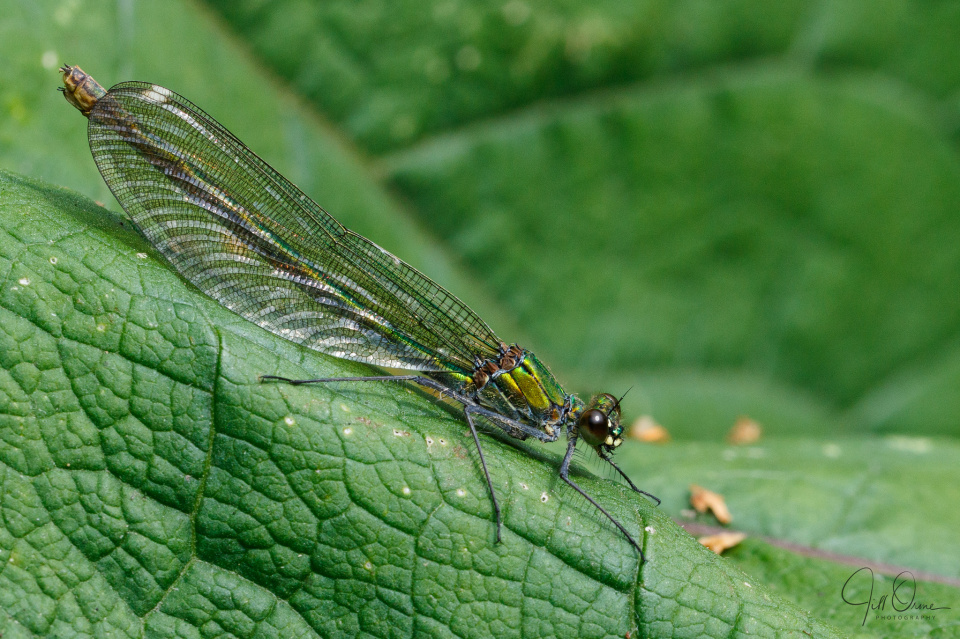 R had to run some errands in Stratford today, and though I’m still suffering badly with Baby B’s cold, I tagged along for the ride in the expectation of an easy Odonata photo opportunity down by the river. In the event there were only three specimens visible at Lucy’s Mill: a male Brown Hawker, hunting over the reed beds, and two female Banded Demoiselles, sitting around on bank-side vegetation waiting for the boys to come and play kiss-chase, and being as disappointed in their expectations as I had been in mine.

I don’t know if this one was an especially brave and phlegmatic individual, or simply too old and tired to care, but she allowed me to walk right up and photograph her with the macro, and the next time I passed this clump of vegetation, maybe ten minutes later, she was still perching in exactly the same position. In theory Banded Demoiselles can remain on the wing through September, but this has been a very strange year, invertebrate-wise, and the dearth of them on this stretch of the Avon today started an alarm bell tolling in my head that the season is now moving towards its close. There always comes a day when I realise sadly that I’ve seen my last Banded Demoiselle of the year, and though I don’t think this was that day, I fear it can’t now be far away – which is why R, who’s a big fan of damselflies in general and demoiselles in particular, suggested that I should immortalise this one today. 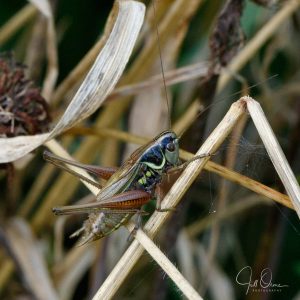 My alternative choice was captured back at home, and marks the first time this year I’ve managed to get a Roesel’s Bush Cricket on camera. Whenever I’m stalking crickets and grasshoppers I see their abject terror and desperate attempts to find a route by which they can leap to safety, and wish that I could hang a sign around my neck, written in Orthopterish, saying Essentially Benign – to reassure them that even though they’re pretty much at the bottom of the food chain, they’re in no danger of being eaten by me. Having said which, I didn’t feel at all benign towards the Great Green Bush Cricket I saw on film this morning, eating a Brown Hawker alive despite the dragon’s desperate attempts to get away. Those are huge crickets though – a female would be around the same length as a Brown Hawker, and more than three times the length of a Roesel’s Bush Cricket – and they’re fierce enough to be prepared to bite humans, so it’s not entirely surprising that they’d take on a large dragonfly if they could catch one.

On the subject of things coming to sticky ends: I mentioned a couple of weeks ago that I’d seen a male Common Hawker kill a female who resisted his attempts to copulate with her while she was ovipositing, but I didn’t post the photos. Now though, the County Recorder for Shropshire has published them on her blog, so if you’re interested, and not especially squeamish, you can see them here.