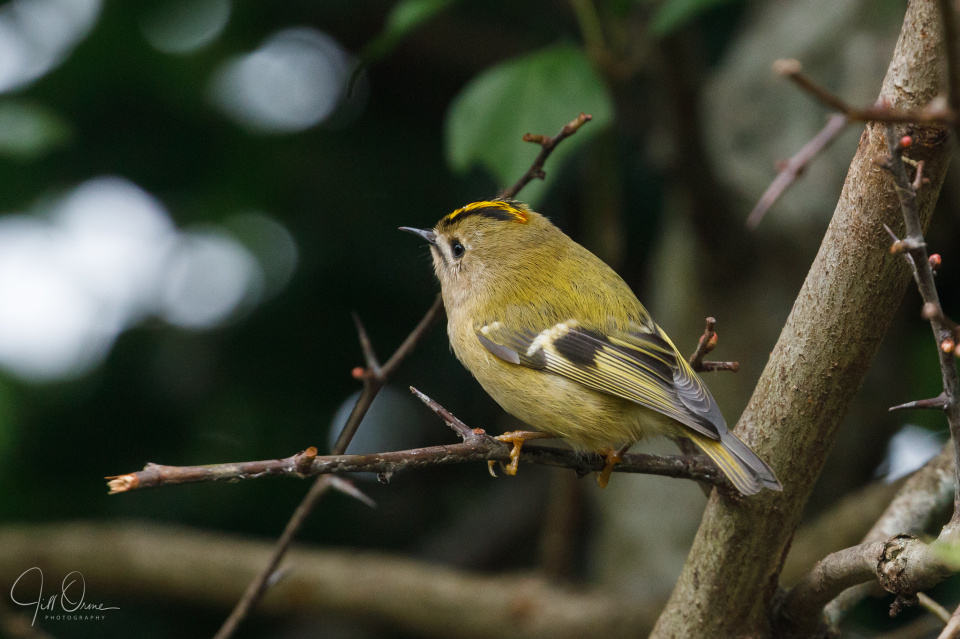 I was on my way back from an nearby nature reserve, where I’d photographed stonechats, yellowhammers, corn buntings, and (rather strangely) a single female reed bunting, and had watched with joy as a skylark made its singing ascent into the drizzly sky. As I walked down the lane into the village I heard a high-pitched wittering in the hedgerow, and stopped to see if the speaker would emerge, but for several seconds there was just rustling and chittering, and an occasional shaking of leaves as someone moved around behind them.

Cold and damp by now, and in serious need of a mug of hot tea, I was on the point of giving up, when this goldcrest suddenly appeared. As I swung the camera up I realised to my horror that the viewfinder was spotted with rain, and I couldn’t see through it properly, but not wanting to miss my chance by stopping to do housekeeping, I simply tracked the blur with my thumb firmly jammed on the focus button and my forefinger on the shutter, and prayed that the autofocus wouldn’t let me down.

“A very small, hyperactive species that always seems to be on the move. Tit-like, it will feed among branches and sometimes hover to snatch food from the undersides of leaves. It sometimes ignores an approaching observer.”

I’d definitely go with hyperactive: out of the hundred or so photos I took, more were spoiled by the goldcrest’s restless busyness than by the fact that I was shooting half-blind. I wouldn’t exactly say that he ignored me, though he was very intent on his mission to find food, but he seemed quite unconcerned about the fact that I was standing just a few feet away from him – every few seconds he would stop for a split second and gaze at me, and then go back to rummaging around. Eventually he finished with this site and flew across to a bush on the other side of the lane, but not before pausing to give me a very nice side-on view. The reason I’m posting this image rather than that one is that from this angle you can see the orange feathers at the back of the crest which identify this as a male bird. 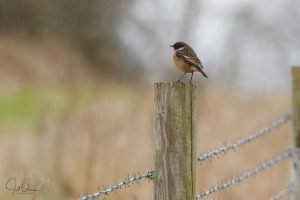 The extra is one of the stonechats I’d photographed earlier, and which was due to have been my featured bird of the day until he was bumped from top spot by the goldcrest. My thanks go to M for telling me about this nature reserve.