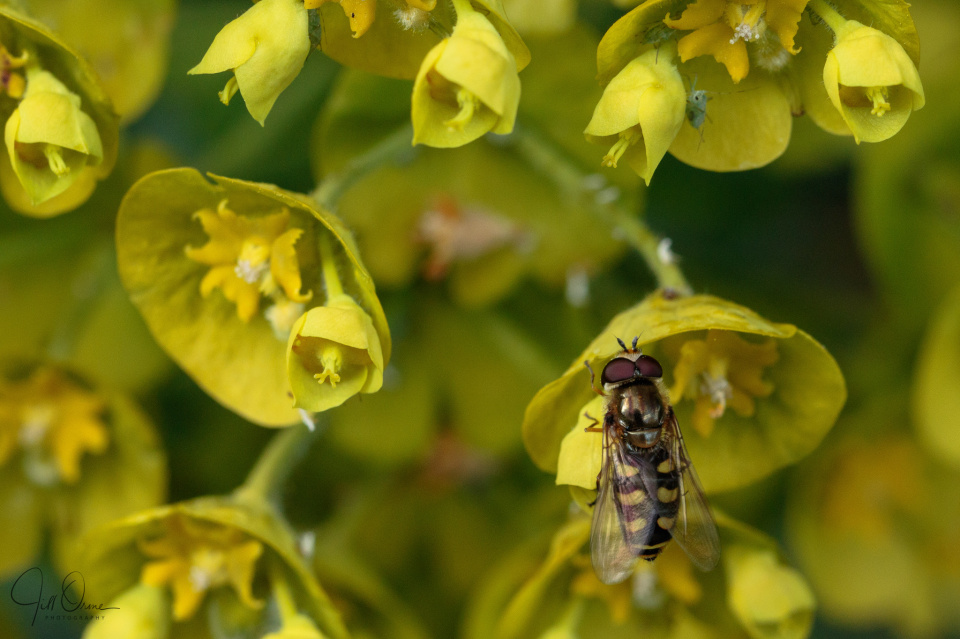 It’s a Eupeodes, but my photos weren’t detailed enough for it to be identified to species.Most probably though it’s E. luniger, which is one of the earliest hoverflies to emerge each spring. The fact that it can be seen as early as January or February suggests that there is a resident population, but it’s a migratory fly, and its peak numbers, usually reached in early summer, are dependent on arrivals from the Continent. Its larvae feed on aphids, but the adult fly is a nectar feeder.

I had thought that I might post a drippy blossom shot, on what turned out to be a fiercely cold as well as a damp day. But after sitting up late last night watching the circular firing squad take each other down in Parliament (“Well, if you won’t vote for my suggestion, I won’t vote for yours – SO THERE!!”), and winding up severely distressed that there aren’t apparently enough grown-ups in the room to stop the country being dragged to the dogs, I slept very badly and woke up in a deep megrim. R took me out for coffee, and Wedding (photos) notwithstanding, cake was eaten, but it only helped momentarily. So even though I braved the elements and got some photos of pear tree blossom, the cheerful white and pink didn’t really suit my mood; this dark hoverfly in murky light represents the day much better.