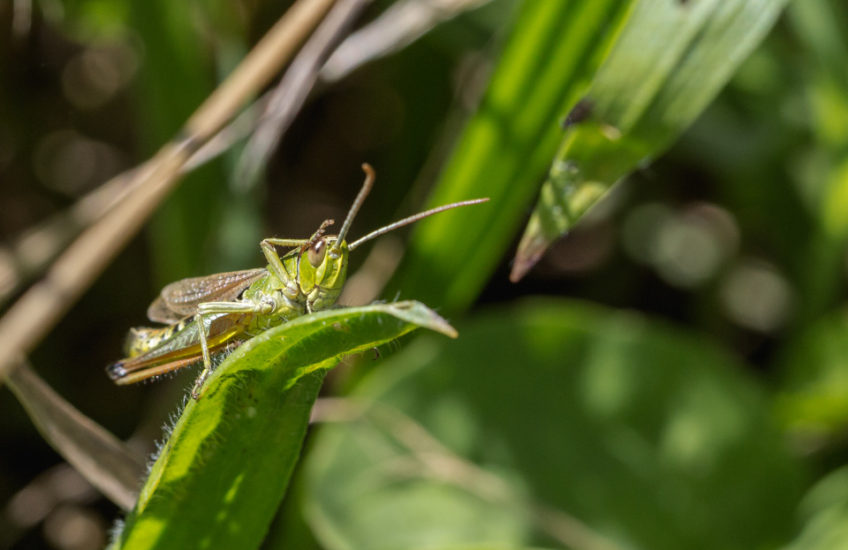 So, I’m just noodling along the path through this meadow, right, sorting myself out some salad for lunch, when along comes this human. I knew what it was right away – we learned about them in school, didn’t we – but I have to say, I had no idea they were that big. Really – it was HUGE! I thought they were about the size of a badger or something, but with, like, longer legs – but it was absolutely mahoosive!

And then it stops, right next to me, and it bends itself in half, with, like, an oofing kind of noise – I didn’t know they did that – and it looks right at me, and it says “Oh! A cricket – nice!” And I think, “Cricket – where?” Because I haven’t seen a cricket anywhere all morning – and then I realise that it means me. Charming – I don’t think. I half expect it to burst into a chorus of When You Wish Upon a Star, but at least it spares me that.

But what it does do is produce this extra eye. Did you know they had an extra eye? No, neither did I – and I can tell you, it’s pretty unnerving. It’s bigger than the other two eyes, and it holds it in its forelegs – I KNOW!!! – and sort of waves it around. No – honestly! Without a word of a lie, this is what it does – it gets its third eye, and it points it wherever it wants to look, using its forelegs, and this eye is, like, enormous, and black, and when it looks at you it blinks really fast with, like, a clicking noise. I’m telling you – this is what happens! Believe me, I’m not likely to forget it in a hurry – I had to go and lie down in a darkened room afterwards, I was so upset by the whole thing.

So anyway, it points the eye at me, and the eye blinks and clicks a few times, and I really don’t know what to do. Cos I’m certain that it is me it’s looking at, but just in case it’s not, I don’t want to move and draw attention to myself, d’you see? Because even though I don’t think humans eat grasshoppers, I might be wrong, and I’m not sure how fast they can strike…

So, I just sit there, blending in with the foliage as best I can, and wait for my opportunity. And after a few seconds (though it feels like about a week, I can tell you) the human unfolds itself, making an even louder oofing noise. I dunno – maybe it’s just air getting forced out through the skeleton or something. I never claimed to be an expert in them! But then – and this is going to shock you, right? – then, it rubs the back of its abdomen, and it curses. Right there in the meadow, where anyone could hear! For a second, I actually think about giving it a chorus of Always Let Your Conscience be Your Guide – I know, I’m so wicked! But really though – cricket! The nerve of it!

Anyway, I’m just deciding that, fun as this would definitely be, I might be pushing my luck a bit too far, and anyway, it’s probably time to leave now… when it suddenly folds itself up again, and the eye thing is back in my face! And I’m like, Oh no!!!! Why didn’t I go when I had the chance??? Only this time, it’s, like, absolutely right in front of me, and I know, right, that I’m totally silhouetted against all that shadow behind me, so it can definitely see me….

And there we stay, for, like – I dunno – hours, I think. Well, a minute, anyway. And it keeps moving the eye a bit here and a bit there, obviously trying to get a better view, and I start to wonder if the eye might have teeth of its own, which, like, totally freaks me out, right? But I’m, like “Just breathe, Jiminy – you’ll get through this if you stay calm”, and then… my head starts to itch. Like, really, really itch. It’s driving me mad – so there’s nothing I can do, except scratch it. Which I do, slowly, still trying to be as unobtrusive as possible. And all the while the eye is going blinky, blinky, clicky, clicky.

And THEN, the human lets go of the eye with one of its forelegs, and it reaches out towards me – and I’m, like, paralysed with fear! Cos I think I’m definitely about to be an hors d’oeuvre here…. But no! It’s not me it’s reaching for, but a bit of old dry stem – I don’t know why, maybe they’re vegetarians too. I hope not, cos given the size of just one of them, a whole swarm could, like, strip a field in a few minutes, I should think. Well anyway, whatever it was doing with that stem, I didn’t wait to find out – with one bound I was out of there! And none too soon either, because it was definitely up to no good. It came after me, rummaging about and moving leaves and stuff – but I was, like, totally gone. Disappeared. Vanished. Nowhere to be found. And it gave up pretty quickly and oofed off somewhere else – which I don’t mind telling you was more than a bit of a relief to me.

What do you mean, exaggeration? I’ll have you know that I am the very model of accuracy and truthfulness, and this entire incident went down exactly like I described it. And if you don’t believe me, just you hang about at the edge of the path, the next time it comes oofing through the meadow – I promise you, you’re highly likely to find yourself getting, like, blogged….