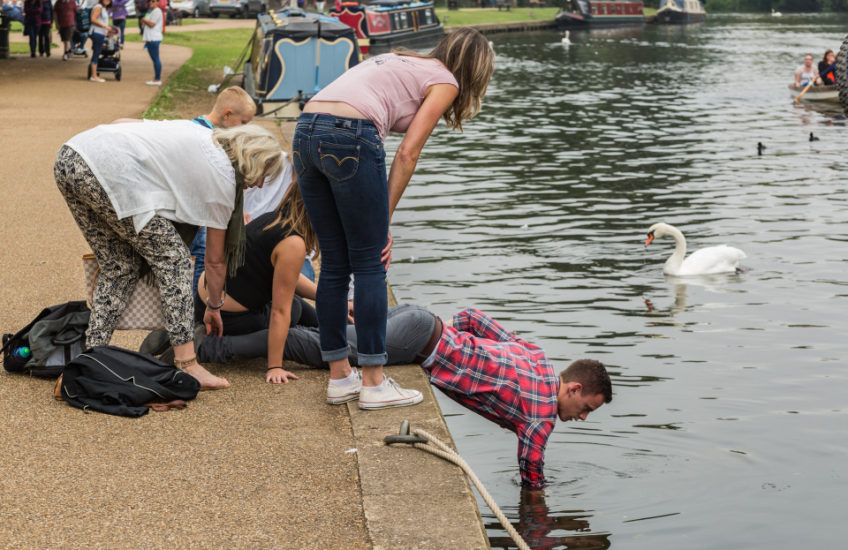 After two days of yomping about with hefty camera gear in strong sunshine and punishing heat, I suffered a bit of a crash overnight, and got up this morning very sore indeed. Then my back decided that my hands were receiving just too much attention, and suddenly went into a spasm that had me walking crab-wise until it eased off a little. All of which, as you’d expect, left me feeling very sorry for myself – and it seemed as though the weather had responded with sympathy, because we were blanketed in thick, warm, humid, unphotogenic murk.

After sitting at my desk in a grump all morning, I decided to go back into Stratford to run a couple of errands and take some “what a difference a day makes” photos around the river. To give you an idea of what the light was like, I took this pano of Meon Hill early in the afternoon from maybe half a mile away – and it wasn’t much brighter in Stratford.

After getting some quite nice shots of canal boats in the mist, I was wandering back towards the Old Tramway Bridge when I spotted a small boy being comforted by his mother, a little way ahead of me. The two women closest to the camera in this shot, who I think were mother and daughter, were approaching the scene from the other direction, and by the time I arrived at the spot it was clear that the little boy had somehow lost his scooter over the edge of the quay side into the river; and the two women, who happened to have an umbrella with them, were offering to use the hooked handle to try to retrieve it. Unlikely, I thought, and though the younger woman lay down on the quay and tried several times to hook the scooter she couldn’t reach it, and it seemed destined to stay where it was.

I had turned to walk away when I realised that something else was occurring, and turned back to find that this young man had also offered to try – which given his height looked more promising. His first attempts also failed, but he simply edged himself further off the quay – to squeaks of protest from his girlfriend, who had been holding his legs, but clearly thought that one if not both of them were about to follow the scooter into the river. But she then sat on his legs, and with that extra security he gave an almighty stretch and hooked the prize. The extra shows the umbrella owner landing the catch, while the hero of the hour is helped by his young lady to return to terra firma. 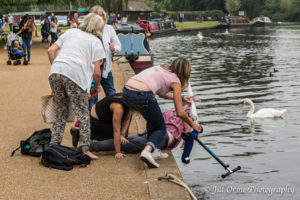 I’d been so intent on this drama that I hadn’t realised how many other bystanders were also watching, until a round of applause broke out. The fisherman looked torn between being very pleased that he’d succeeded, and mortified to find himself the centre of so much attention. The scooter owner was suitably grateful, and his mother looked highly relieved.

By now I was about to go over my parking time, and as I hot-footed it back to the car (Blip smugly in the bag), I found myself thinking that despite the many petty annoyances offered to the rebellious middle-aged feminist Guardianista by middle-class middle-England, there are very much worse places one could find oneself living than this.