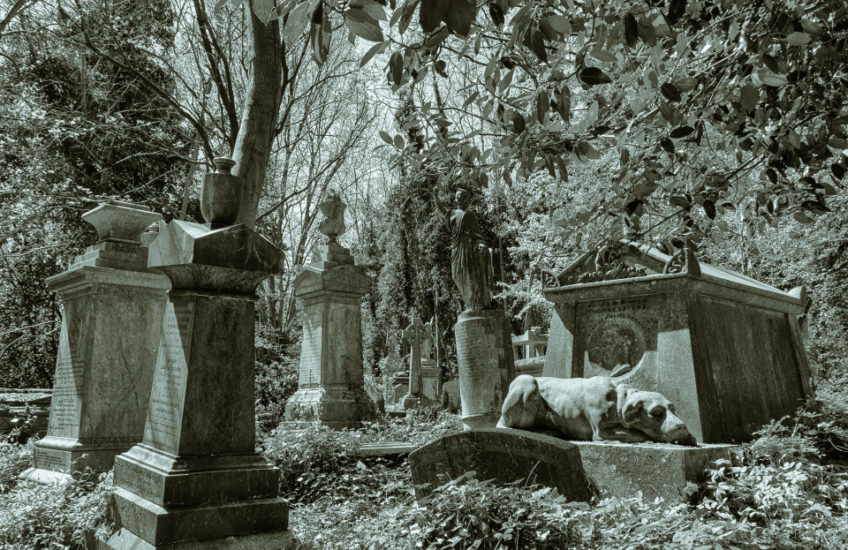 During the Stratford-upon-Avon blipmeet in January, Chantler63 mentioned that she was thinking of organising a private tour of the West Cemetery at Highgate – this being the older and more atmospheric section, which for reasons of public safety and environmental protection can only be visited with a guide. I’ve wanted to take a photo walk around this famous burial ground for a long time, so I asked her to include me if she did get a party together, and today thirteen of us met up in London and took our tour with a patient and forbearing volunteer guide named Russ.

It was an extremely interesting morning, pressing all of my family and social history buttons as well as the photography ones. The only problem – and the irony of this is not lost on me, after weeks of moaning about horrible weather and dreadful light – was that it was a bright sunny day, and I came back with both cameras (I know, I know – please don’t judge me) full of harsh, contrasty images of bright blue sky and vivid green foliage. They’re going to need some thought and then quite careful processing, but for now I’ve just worked on this one; I converted it to mono in Silver Efex Pro, and then split-toned it in Lightroom to try to give it something of the feel of an old photograph.

You may well have seen images of this tomb before, because it’s one of the most famous at Highgate – but not surprisingly, I just couldn’t resist the dog, which was called Lion. His owner, Tom Sayers, was born in a Brighton slum in 1826, but moved to London in his teens and became a bricklayer. He took up bare-knuckle fighting, which though illegal had a considerable following, and after some early wins turned “professional” at the age of 23. Apart from one defeat to an older and wilier man, he quickly gained the reputation of being too dangerous for men of his own size to fight, and had to take on larger and heavier opponents – always successfully.

In 1860, when Sayers was nearly 34, he accepted a challenge from an American champion called John Camel Heenan, who was eight years younger, five inches taller and forty pounds heavier, and fought him at Farnborough in Hampshire, in defiance of the efforts of various upright citizens to get the match stopped. Despite the appalling reputation of prize-fighting, the enormous crowd of spectators at this bout is said to have included the Prince of Wales, the Prime Minister and the writers Charles Dickens and W. M. Thackeray, and even Queen Victoria apparently asked to be told the result.

The fight went on for two and a half hours and over 40 rounds; both men were seriously injured but still on their feet when the Hampshire Constabulary rather belatedly stepped in and stopped it, and both then claimed to have been on the point of victory. After quite a lot of mud-slinging, they eventually split the prize money, and both were awarded championship belts.

Tom Sayers never fought again. A public subscription raised £3,000, which was invested on his behalf and provided an adequate income to support him through the remainder of his short life. Suffering from diabetes, tuberculosis and the effects of heavy drinking, he died in 1865 at the age of 39. He was so famous that many thousands of people lined the streets of London to watch his funeral procession on its way to Highgate Cemetery; the hearse was immediately followed by his gig, with his mastiff Lion riding in it wearing a ruff of black crêpe. Lion is said to have behaved beautifully, which is more than can be said for many of the spectators who fought their way into the Cemetery to witness the interment, doing considerable damage in the process. The police had to step in again, this time to enable Sayers’ coffin to be buried in a reasonably dignified manner.

There’s one more rather tragic footnote to this story. When he was about 19, Sayers had set up home with a 15 year old girl called Sarah Henderson, with whom he had two children. Later, when she was old enough for them to marry without her father’s consent, they formalised the relationship – but she then ran off with another man, by whom she had three more children. Divorce was almost impossible for any but the most wealthy at this time in England, so Sayers and Sarah remained married; for a while he lived with another woman, but this relationship also broke down. After Sayers’ death Sarah went to court to have her children by him disinherited by reason of illegitimacy and, astonishingly to us now, she succeeded: the judge ruled that the two oldest children were certainly illegitimate, their parents’ subsequent marriage not having changed their legal status, and that as it wasn’t possible to prove that Sarah’s three later children were not by Sayers they were to be regarded as his legitimate heirs.

Perhaps Sayers should have avoided women and stuck with dogs.