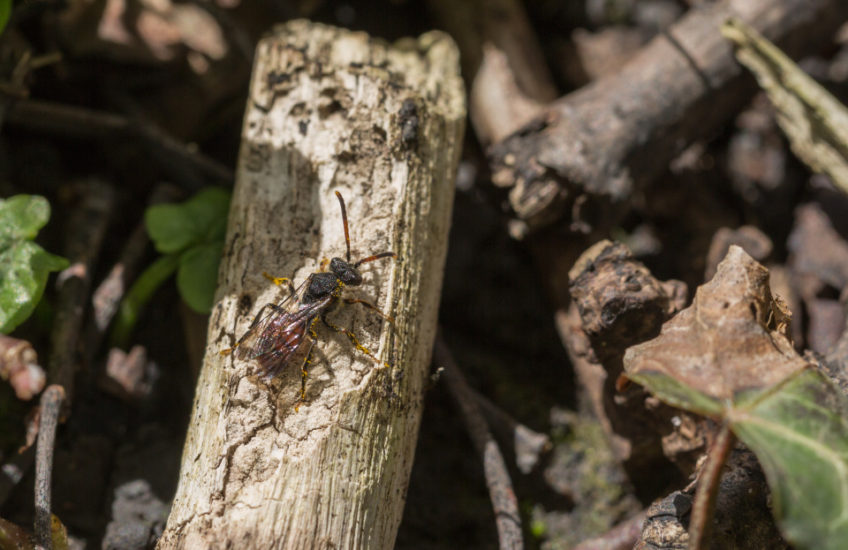 Doesn’t it always seem to be the way that wherever there are folks going about their lawful business, working hard and trying to provide a decent standard of living for their families, there are other people trying to separate them from their wealth? Well, it appears that this is not a purely human phenomenon – not that that makes it any more admirable.

This is Nomada fabriciana, which is a cleptoparasite of one or more of the Andrena bee species. The Andrenae are mining bees – the females dig burrows and construct small nests consisting of a few cells, each filled with pollen and containing a single egg, which they then seal. When the eggs hatch, the larvae eat the pollen provided by the mother bee and then pupate – unless something has already eaten the pollen, in which case they starve. Guess where Nomada fabriciana lays her eggs? Correct.

I’ve trained myself to think “nature is nature, and everything has its place in the scheme of things”, but I can’t claim to be happy, thinking of the poor Andrena bee doing all that work and then going off and dying, while the Nomada larvae thrive on the fruit of her labours. And the only “benefit” I’ve been able to discover from these tiny thieves is that their presence is evidence of a healthy population of Andrena bees – so maybe their place in the scheme of things is simply to stop the Andrenae becoming too successful – I really don’t know.

Technically I was pleased with this shot, because the Nomada is really, really small – she’s resting on a twig, the shrivelled leaf at the right side of the frame is ivy, and she’s covered with grains of dandelion pollen. Please do look full-screen, if you have time. I had a pretty good bug hunt today actually, and had several other contenders for my Tiny Tuesday blip – as this one got the nod, I’ve put a few others here.

I’m now going to throw some things into a camera bag and then myself into bed, because I have to be up at OMG-hundred-hours to get a train to London for a walk around Highgate Cemetery – oh, the excitement!!