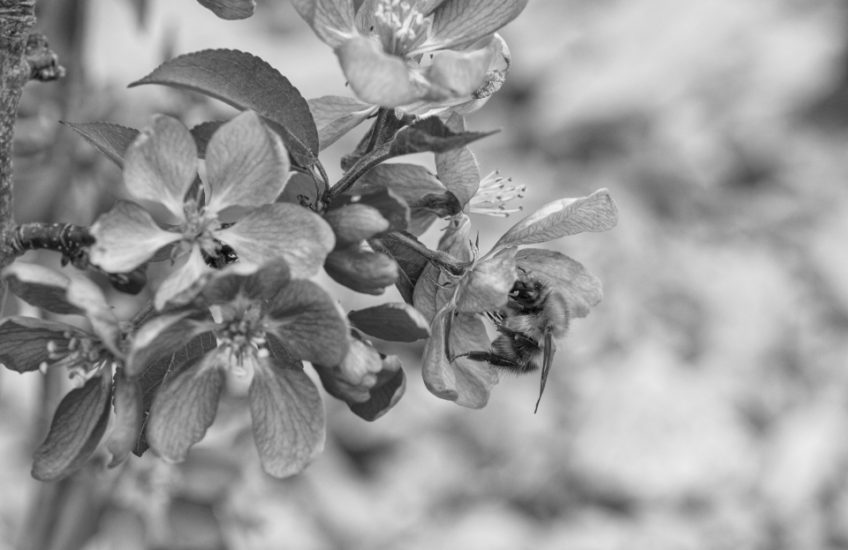 If the weather had been better today I would have broken out the Big Lens and set myself up with my tripod on the patio, in the expectation of getting a bird shot. But it was cold, dark, spotting with rain and extremely windy – not good conditions for photos of squabbling birds.

So (to no-one’s surprise) I resorted to a bug hunt. Between us, R and I spotted a few solitary bees while we were out walking Arthur, but my shots of those turned out to be more of recording than posting quality. Back at home I took a slow and careful walk round the garden, but found almost nothing and was on the point of retreating to the kitchen for tea and sympathy – when I heard the faint buzzing sound of a decent-sized bee over by the yard wall. Investigation revealed it to be one of my favourite bees: Bombus pascuorum, the Common Carder, feeding on my crab apple tree.

These chunky bumblebees, with their distinctive ginger thorax hair and faintly striped abdomens, are very common in gardens and hedgerows. They are social bees: each queen that emerges from hibernation in the spring will start a colony by laying a few eggs which hatch as workers; the workers then forage for food and tend the nest while the queen lays more eggs, and by the time the colony dies, as much as six months after it was started, it can contain up to 200 workers. Late in the summer males and potential queens are produced; the males fly around in search of young females, and after mating the males die and the young queens seek out places to hibernate through the winter. The rest of the colony – old queen and workers – dies in the autumn. I’m not a good enough entomologist to tell you if this was a queen or a worker, but I suspect she was a queen, because she was quite big and didn’t seem to be collecting pollen.

Common carder nests are constructed in cavities such as abandoned mouse runs or old bird nests, or inside grass tussocks. Material such as moss is collected and combed to provide a protective covering for the cells containing the larvae, and it’s this habit which gets this species its name: carding is a term from the cloth industry which describes the combing and straightening of wool, cotton or flax fibres before they’re spun to make yarn.