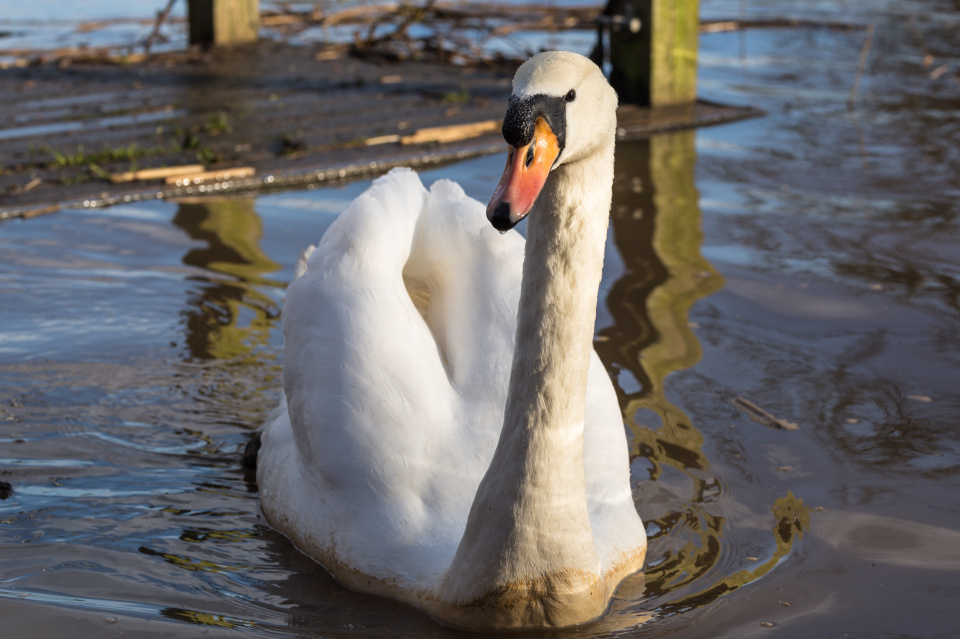 R and I went for lunch in Stratford today, as is our wont on New Year’s Eve – we really don’t care for it as a celebration, and like to be safely back at home with the door locked and the TV on before all the hoohah kicks off. I think it’s an age thing.

Anyway, we were blessed with a lovely day in the aftermath of Storm Frank, so I took a stroll from Old Town along the Avon, camera in hand. There’s a little landing stage between Holy Trinity Church and the theatres, which quite often seems to be patrolled by this swan – at least I assume from his demeanour that it’s the same one, though swan identification isn’t one of my strong suits. If you don’t spend much time around mute swans you may not know that this photogenic posture with the wings held up tends to denote aggression – but after posing for this shot in some rather nice light he simply swam up to me, saw that I had no food and swam away again.

I was still kneeling on the landing stage a few seconds later when a group of younger swans appeared and swam towards me. They were moving quite fast and I was concentrating on trying to keep focus on them – when suddenly they veered away at speed. I turned to see what had frightened them, and there was Grumpy Swan, pretty much at my shoulder. I simply pressed the focus button and took the shot I’ve put in as the first extra – I had to sort out the exposure later in Lightroom, but the image is completely uncropped.

For an instant I did wonder if I should move, because the river is very high at the moment and he could easily have come up onto the landing stage with me, but it turned out that I wasn’t his intended victim: he fixed on one of the juveniles, took off after it and chased it right down to the theatre before losing interest. The beginning of the chase is the second extra, and you can see from the churning of the water how fast he was going.

While we were having lunch R and I were eyeing a clear blue sky and debating the fact that heavy rain was forecast for the afternoon; it seemed pretty unlikely, but as we were driving away from Stratford it began to spit, and we arrived home at exactly the same moment as another huge storm. I had to go out again to get Arthur checked over by the vet in Broadway, and going down the Roman road I was driving directly into it – I could barely see where I was going, which was far more excitement than I needed. The storm went on at full force for about 20 minutes before easing up, and by the time I got back home just after 4pm it had disappeared completely and it was a fine evening. I know I’m conforming to a stereotype here by wittering on about the weather, but it really was quite extraordinary for these parts. I do hope that we return to meteorological normality soon, and that in the meanwhile no-one else is flooded out of their property.

I’m now off to slonk in front of a film with a glass of wine. Whatever you’re up to this evening I hope that you enjoy it, and that it doesn’t leave you wishing you hadn’t tomorrow morning. A very happy New Year to you!