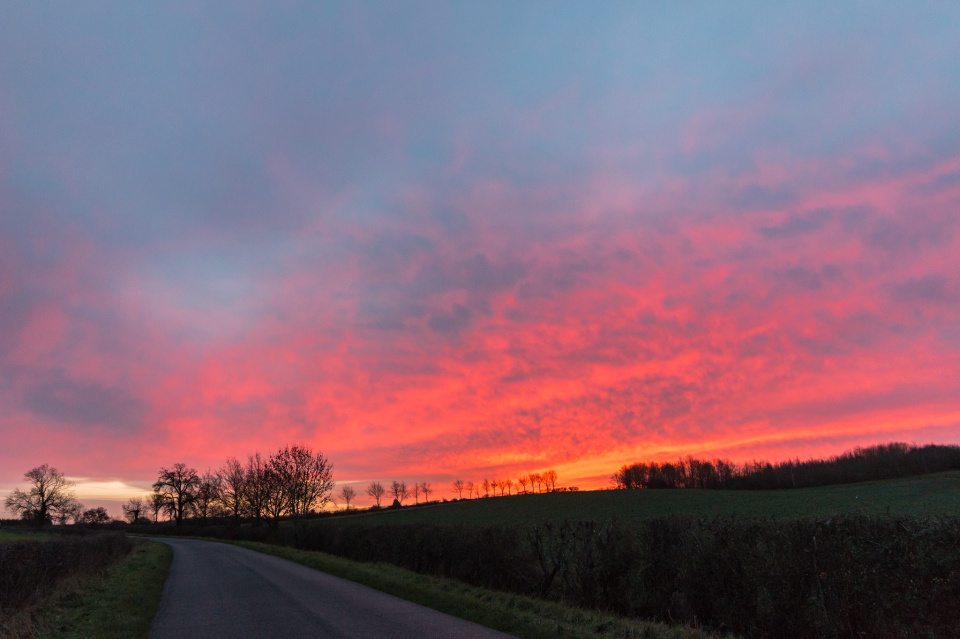 I stood at the window for about ten minutes this morning, trying to convince myself that there wasn’t going to be a decent dawn so there was no point getting dressed and going out. Then I decided that the developing pink tinge wasn’t in fact a figment of an imagination soured by too much red wine and too little sleep, so I’d better get on my bike.

Metaphorically. I don’t ride a bike.

I took my first shot, of a slender red and gold streak on the horizon, at 7.56am. This was the height of the fire, at 8.04, and four minutes later the colour was gone. I thought I might catch the sun as it appeared between Ebrington and Meon Hills, so I carried on through Pebworth and took another couple of shots from a vantage point between there and Long Marston – the shots weren’t up to much, but I had an interesting chat about lenses with a vast labradoodle and his owner who were out for an early walk. Then I went home for breakfast – though I had to clean up the kitchen first.

Poor Arthur is continuing to be unwell, and as a hound who has always had a cast-iron digestion and whose house-training is rock-solid, he’s mortified about the mess he has now made on the floor on four out of the last five nights. I’m far more worried about it than annoyed though, and fervently hoping that the drugs Ian prescribed for him yesterday sort out the problem pretty soon. Every day that the issue goes on makes it more likely that it’s something serious, and though I’m trying to brace myself I know that I’m hopelessly unready to deal with that possibility.

I don’t want my first journal entry of the year to be a negative one, so I’m going to end with the hope that this vivid beginning is symbolic of a bright future, and that 2016 turns out to be a great year for everyone I care about.

I also hope that it will mark a positive turning point for this site, with the crowdfunding appeal succeeding in taking it into community ownership – it’s such a great virtual community that it would be a huge shame to lose it.  The total pledged now stands at £78783.39, which is quite a jump from yesterday and makes me quietly optimistic that we might all still be here at the beginning of 2017.