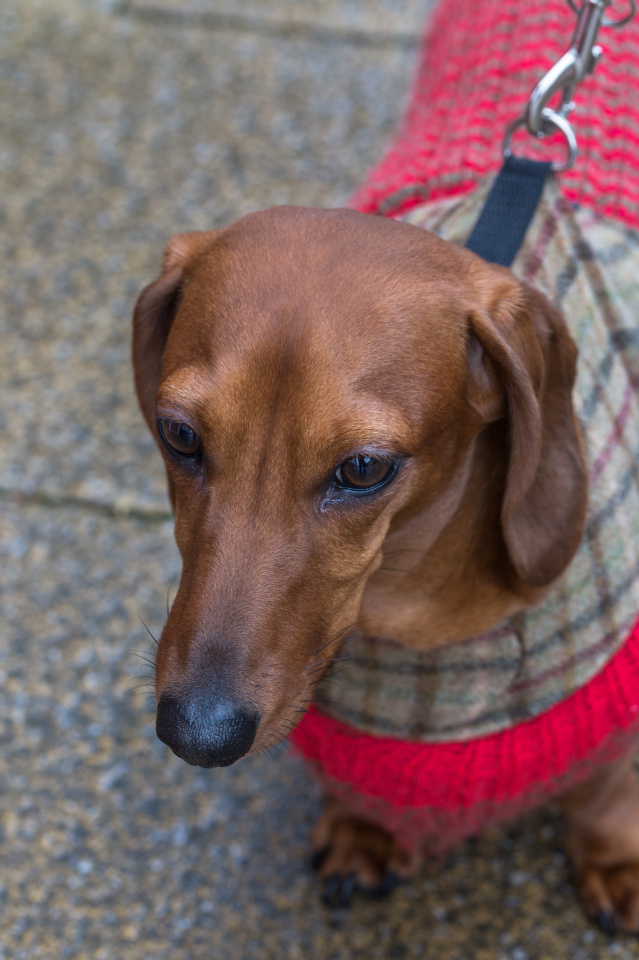 This is Rupert – I think. It might be Rufus…. but I think it’s Rupert.

R and I were walking along Henley Street in Stratford this morning, between a cup of coffee and the cinema (where R had reminded me that I have a photo on display that I hadn’t yet been to see), and we found ourselves following a young couple with a dachshund. I was immediately charmed, partly just because it was a dachshund, partly because of its spiffing jacket, and partly because it had a delightfully wiggly walk. In fact I assumed it was a female, for which I later had to make a mental apology.

I stopped half way along the street to take the photo I’ve put in as the extra – I’ve no idea what the humans were waiting for, but we were both very amused by the dog’s demeanour. And then as we walked on I realised that the couple with the dachshund had stopped to look in a shop window, so I rushed over and asked if I could photograph their tiny hound.

R’s head always disappears down into the neck of his jacket like a dismayed turtle when I do this kind of thing, but that’s the difference between an introvert (him) and an unsociable extrovert (me): most of the time I glower at the world as if I would like to kill it, but on occasion my interest in something (generally a dog) overwhelms my lack of interpersonal skills and I find myself talking to a total stranger. And I have to say that provided I’m admiring a canine or a child, it usually goes quite well. These people were very nice – though clearly my interest in the dog outweighed the attention I was giving to their answers when I asked about him – and I was just sorry that I didn’t have an easy way of giving them my email address: I knew I had a decent portrait and I’d have been very happy to send hem a copy of it. I’ve been meaning to get some cards printed up for occasions like this, and I really must get on with sorting some out.

In other dog-related news: Arthur had a better night last night (meaning that I had a better morning); and though he was still rather withdrawn at breakfast time he perked right up around mid-morning and started doing the Treat Dance round the kitchen every time he set eyes on me. Given all that we went through last month I’m cautious about starting a Treat Dance of my own just now, but I’m cautiously hopeful that the meds are working: it’s certainly nice to have to tell him to “STOP SCAVENGING, ARTHUR!” after several days of him lying in a distant heap on the sofa. Thank you for all your kind words and wishes: I truly do appreciate them.

I just took my daily look at the Blipfuture crowdfunding page, and the total is now at £85198.39, which is just shy of half way to the target. And almost worth a Treat Dance…!