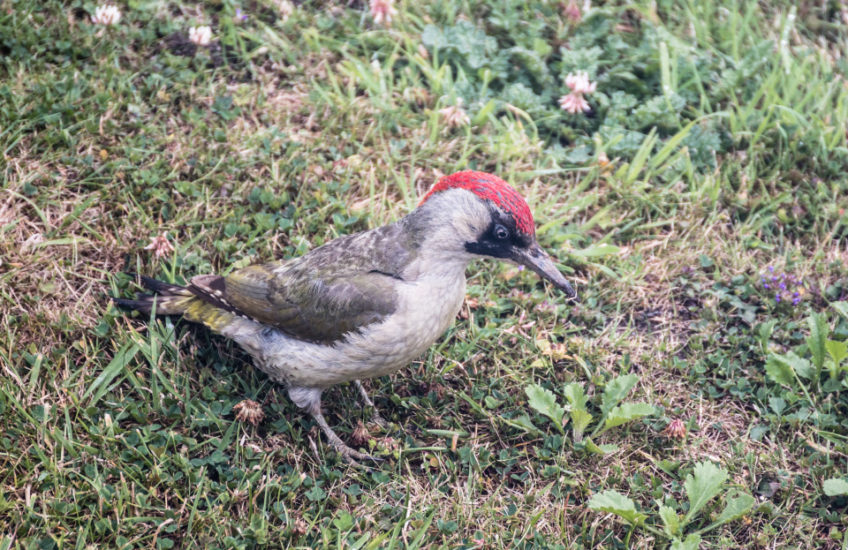 I was cleaning my teeth this morning when R came upstairs and told me that there was a green woodpecker on the patch of mixed straw, moss, weeds and ants’ nests which for no obvious reason we call “the front lawn”.

Luckily my camera was on my desk, so I quickly put the long zoom in place and managed to take several shots from the upstairs windows before she flew away. Given that it was taken at a fairly acute angle, through double-glazing, I’m quite pleased with this – it shows her markings pretty well, and also the fact that her beak is covered with earth from pecking the ground.

You can tell that it’s a female because there’s no red within the dark moustache mark by her beak. The fact that her back is quite speckled, rather than a more solid green/grey, makes me think that she’s still quite young, though old enough for her red cap to be fully developed.

Green woodpeckers are great birds to have around if you suffer with ants, because that’s largely what they eat – a fact which explains the amount of time they spend feeding on the ground. Their beaks are softer than those of spotted woodpeckers, and their tongues are very long to allow them to lick ants and ant larvae out of the ground. They have a very distinctive undulating flight – often only a few feet above the ground – and a loud call which gave rise to their old dialect name, “yaffle”. As most ground-feeding birds are, they’re very wary and easily disturbed; but there seem to be a few breeding pairs in this area so they’re fairly frequent visitors to the garden. It’s unusual for them to come as close to the house as this though, so I was very happy that R spotted this one in time for me to photograph her.

The extra is a rose I don’t get to see often enough, because it’s planted in a blind corner at the north side of the house, where I rarely have cause to go unless I’m weeding – which is what R and I were doing this morning when I took this photo. Because I didn’t plant it I’m not entirely sure what it is, but I think it might be a climbing Peace. 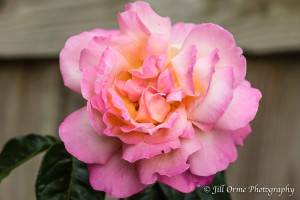