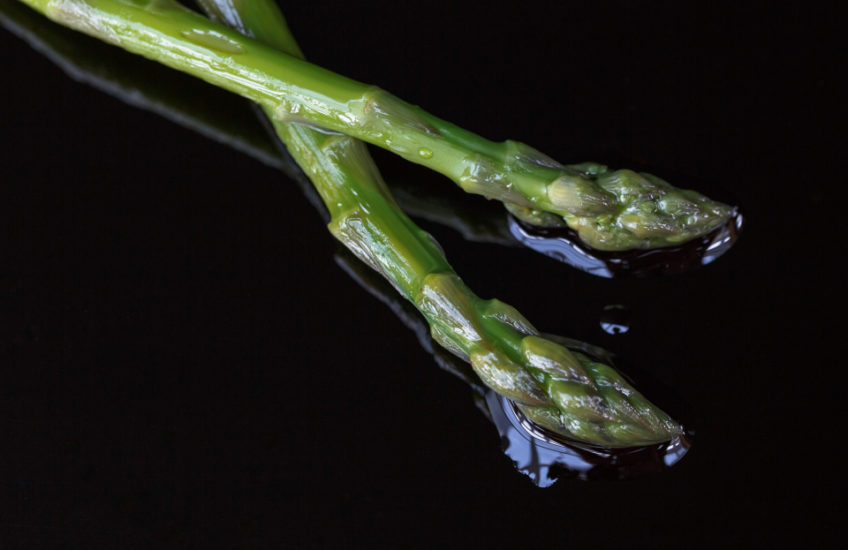 “Oh, I know,” I said, “I’ll do a macro of a couple of asparagus spears. But I’ve posted raw gras before – today I’ll put cooked spears on my black base, and drizzle lemon oil over them. Easy.”

Not easy. Couldn’t get the light right. Got very cross. Took 50-something photos, and hated all but two of them. Then had to get the lemon oil off the black perspex…… sigh….. On the plus side, I now know that I don’t want to be a food photographer when I grow up.

This evening R and I went over to Bishop’s Cleeve near Cheltenham, where the old tithe barn has been turned into a community hall and concert venue, to hear Colin Blunstone – the voice of She’s Not There, and I Don’t Believe in Miracles, and Say You Don’t Mind, and Old and Wise (song number 37 for my funeral, if R is paying attention); he’s still performing with the re-formed Zombies (in fact they’re about to tour their 1968 album Odessey and Oracle), but tonight he was singing with his own band. At 71 he can’t float the top notes the way he used to – especially as he was battling a cold – but his voice is still remarkable, and he has a sweetly geeky stage persona. If you’d told me when I was lying on my bed playing Ennismore to death back in 1972 that 45 years on I’d be sitting with my husband in a barn in Gloucestershire, listening to Colin sing my favourite ever song about a rotten holiday, I’d have given you a Very Special Look Indeed – but this evening, there we all were. I can’t deny that it made me feel a little old – but in a mood of nostalgia rather than sadness.