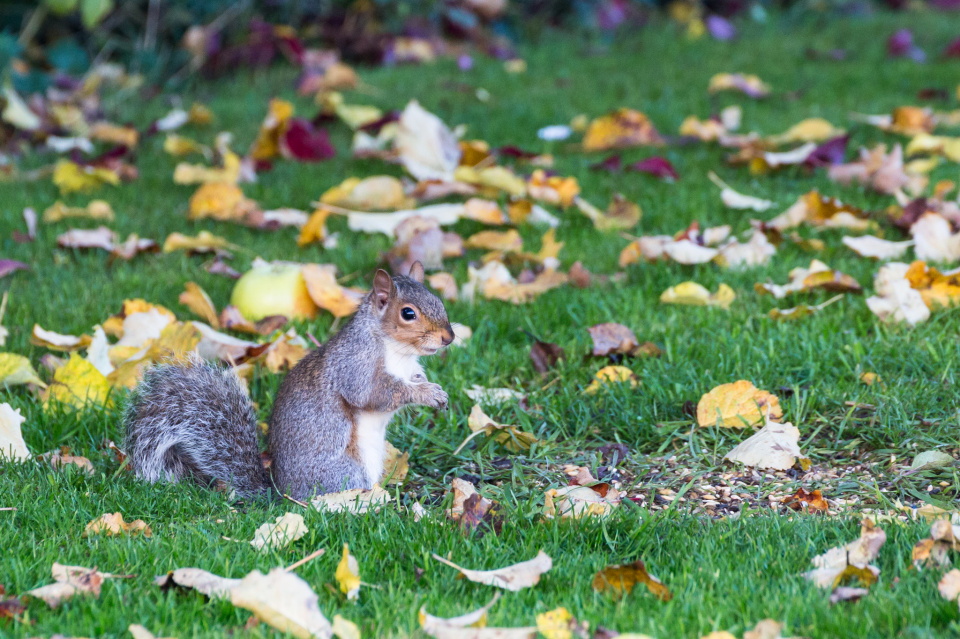 I spent far more time today than was sensible stalking squirrels. This morning we had Nick and Zorro on the bird feeders at the same time, and I managed some slightly spooky shots of them through the fog. They were both nervous though – I guess the poor visibility made them uneasy – and they took off at speed as soon as they saw me.

I then spent a couple of hours trying to clear my desk of festering administrative tasks – paying bills, setting up backups, updating the maps on my satnav, and arguing with someone over a duplicated charge on my credit card bill – nothing major, but all time-consuming and grump-inducing. Having dealt with all of that and before settling down to edit my foggy squirrel shots I took a break and went to the kitchen to make a cup of tea – and saw that the fog had cleared, and that there was now another fat male squirrel on the peanut feeder.

I was just stepping gingerly out of the back door with the camera when this pretty little female suddenly appeared from a flower bed and ran across the lawn. To begin with she was facing away from me and didn’t realise I was there, but an ill-judged step caught her attention and she leapt for the apple tree. She’s quite brave though – I stopped, and so did she… we both waited… she turned back and waited again.. and then she slowly came back down onto the grass and resumed her meal. She was clearly watching me now, but I still edged forward, and by the time I took this I was right at the front edge of the patio, only four or five metres away from her. I was trying to lower myself down slowly and smoothly so that I was sitting on the patio wall, but that turned out to be one movement too many, and just after I took this she turned and ran for the tree again. I knew I had plenty of shots by now, so I left her in peace.

I’m very taken with her, and I especially like her outfit. That grey marl jacket with contrasting sleeves and bands over the pristine white jumper looks very chic, I think!