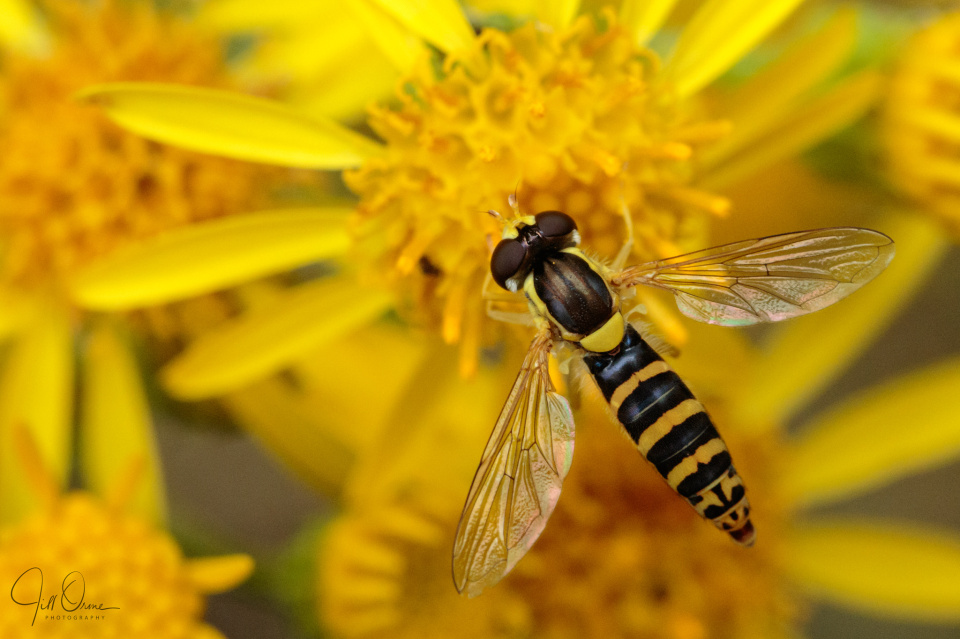 I suppose you’d say that she’s a wasp mimic, though with that long, elegant body she’s not a very good one. She’s a Sphaerophoria – probably S. scripta, because in England that’s the most common species of this genus, and there was a male S. scripta on the same plant at the same time, but female Sphaerophoria hoverflies can’t be fully identified from photos. I really like the way her colouring works against the ragwort, and both she and the male were good subjects for photos because they were entirely uninterested in me and my macro lens. The adults of this species are, as you can see, nectar feeders, but their larvae eat aphids on a wide range of plants including cereal crops, so they’re very useful little beasts to have around.

If it weren’t for the two ragwort plants and one large burdock that are currently flourishing in our garden, I really don’t know what the nectar feeders would be eating, because almost everything else has gone over, if it hasn’t died completely. We did have a few hours of light rain yesterday evening, but I don’t think it achieved much other than to encourage the roots of my surviving plants to turn up towards the shallow layer of dampness – which is likely to be counterproductive now that the baking heat has returned.

I was chatting to a neighbour this morning who said that she doesn’t think this summer is as bad as 1976, when she remembers walking her young children across the partially dried-up bed of the Ladybower Reservoir. I also have quite vivid memories of that summer, and though I didn’t dispute her assertion, I don’t think I personally suffered then as much as I’m doing now. I can only assume that it’s an age thing.