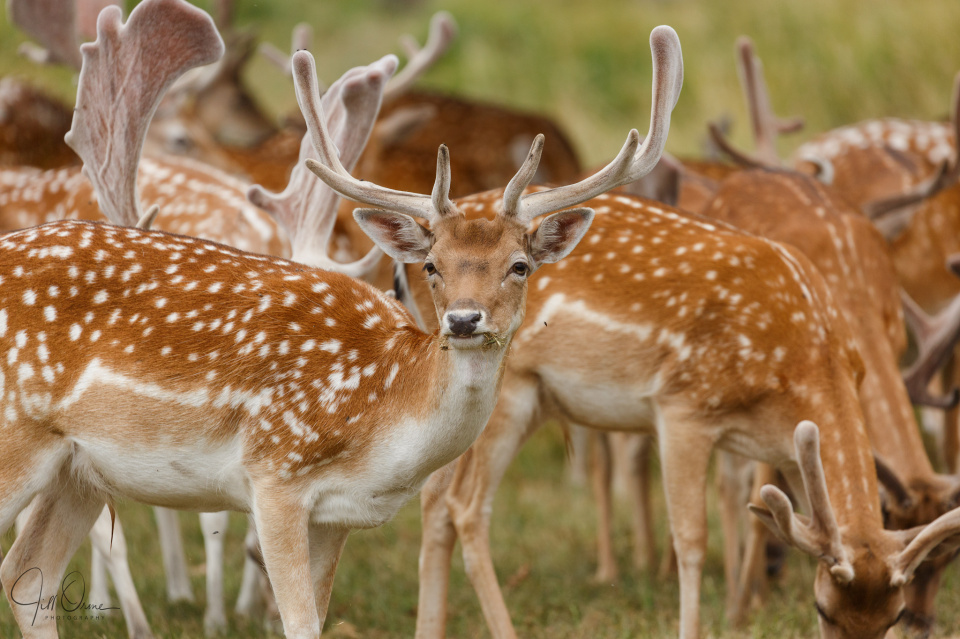 R and I went out for breakfast this morning, and then on to Charlecote Park, where we had a very pleasant walk while the morning was still slightly overcast and not too hot.

The fallow deer, as usual out of the breeding season, were hanging out in two separate herds – the does and last year’s fawns in the West Park (along with a few second year males, which have single-spiked antlers, and are called ‘prickets’), and the older males in the Front Park. This rather pretty youth is probably three years old: in the wild a fallow buck’s antlers don’t become palmate until he’s four, but in captivity the palmation can happen earlier. His antlers will increase in size every year, until he passes the peak of virility at about ten years of age, and then they’ll become smaller again for the latter years of his life.

Fallow bucks shed their antlers every spring, usually in late April or early May, and immediately begin to grow a new set. When they’re still covered with fuzzy, blood-rich skin like this, they’re said to be ‘in velvet’; by late summer the antlers will be grown and the skin will begin to die and peel away, and it will have been fully shed by the time of the rut in the late autumn. The process of shedding the velvet looks extremely gory, though it’s apparently not in the least painful – I’ll try to remember to pop back in about a month to get some photos.

While we were walking the West Park, and carefully sticking to the mown rides so as not to upset the does and fawns, R and I were very entertained by the large number of grasshoppers which were bounding about the place – they were literally pinging around our feet at every step, and we just had to trust that they were capable of getting out of our way and not being stepped on. Most of them seemed to be Meadow Grasshoppers, but there was an amazing range of colours and patterns on display, and R’s sharp eyes spotted a form I’ve only ever seen before in other people’s photos, which is pink, green and cream. I’ve posted it here, if you’re interested.