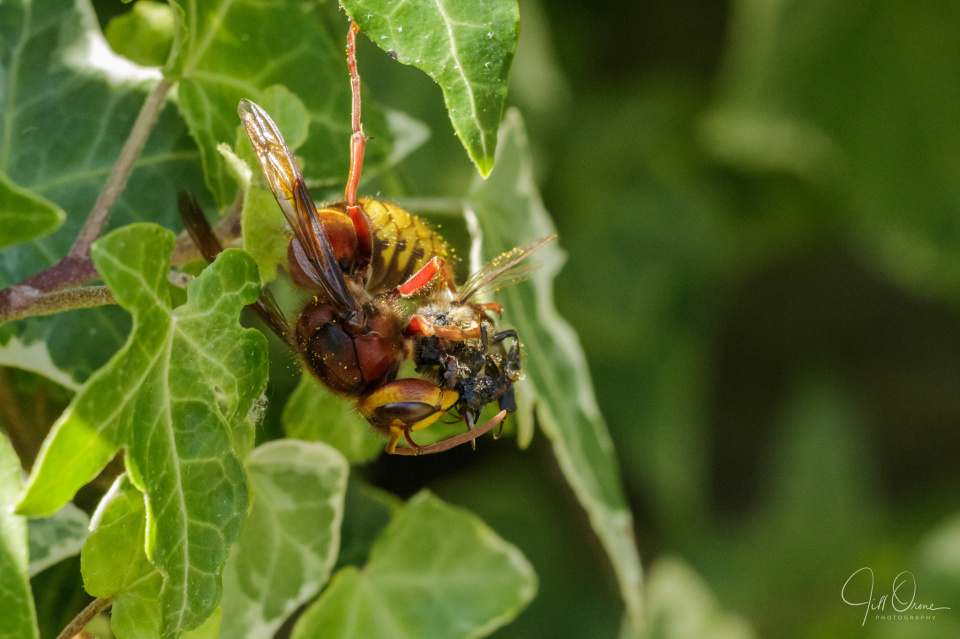 If you think this is gross, you should see the extra. If you’re squeamish, DON’T CLICK ON THE EXTRA!! If you’re not squeamish, however, you may like to admire a truly splendid set of mandibles. 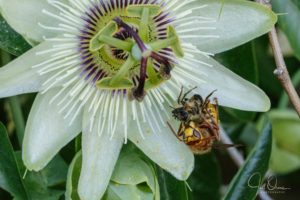 When I said that there was almost nothing flowering in the garden because of the heat and drought, I’d forgotten the passion flower we planted a few years ago to cover part of a rather ugly old wall, and which is loving this weather so much that it’s now trying to cover the yard, the cars, the house, and the next-door neighbour’s house as well. Stuck for a photo this afternoon, I remembered that honeybees go absolutely wild for passion flower nectar, and went to check it out.

As well as the expected honeybees there were some bumblebees browsing the flowers, and I was clicking away at them happily when this hornet suddenly swooped in. I’m unreasonably terrified of hornets – the European variety is said to be no more likely to sting you than a wasp – but it was a handsome thing, and I forced myself to follow it with the camera as it moved from flower to flower. That’s interesting, I thought; I didn’t know that hornets were nectar fee- oh! as it suddenly pounced on a honeybee.

A few seconds of what I can only describe as feeding frenzy ensued: a sort of swirling movement of hornet and bee, when I couldn’t get any focused photos; and then the hornet straightened itself out and revealed that it had bitten off half the bee’s head and the end of its abdomen. It carried on eating for another few seconds, and then took off with its prey, and landed on the ivy at the top of the wall, casually hanging on, as you can see, by just one claw.

The extra photo was taken about half a minute after the initial pounce, and the main image about another half a minute after that – by which time you’d have been hard-pressed to tell what it was eating, unless you were an expert in the constituent parts of a honeybee. This was the last photo I took though, because just then it lost its grip on the ivy and dropped – and I yelped and leapt backwards. I did look for it, but couldn’t see where it had come down; at which point I lost my nerve completely, and left.

A little research has educated me in the feeding habits of hornets: they are mainly carnivorous, but the new queens that emerge around this time of year will also build themselves up with sugar from nectar, windfall fruit, or tree sap, before seeking out a sheltered place to hibernate through the winter.