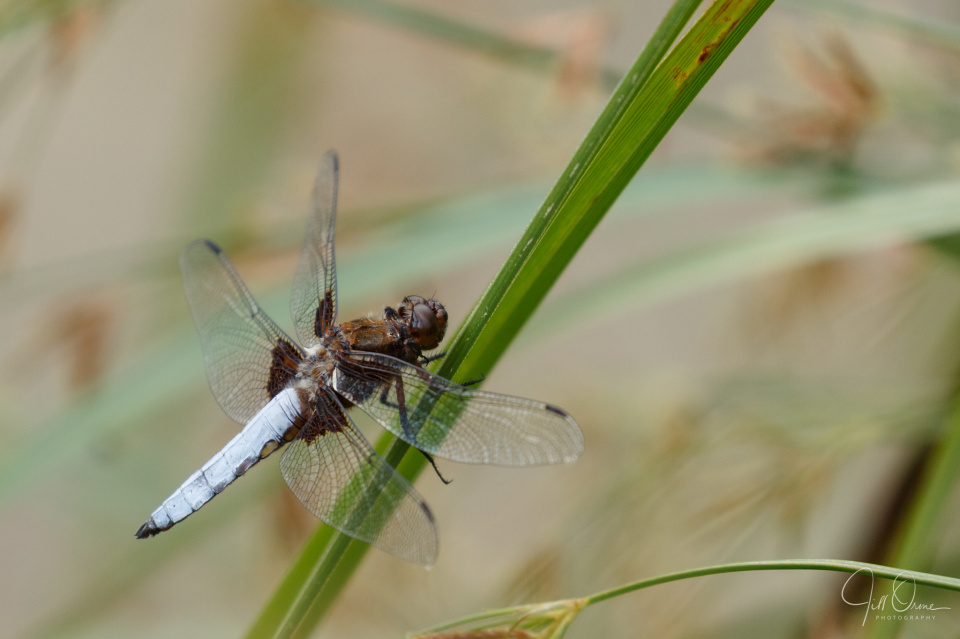 I was tired and out-of-sorts today, largely because of my increasing anxiety about the hideous political mess we’re in at the moment, and a lack of any optimism that it’ll get better any time soon. I didn’t really feel like moving from my desk, but R had an appointment to go out and give blood (we both used to donate, but they’ve stopped asking for my blood – R’s, though, apparently has the exact concentration of Merlot that they’re looking for, and they can’t get enough of the stuff), and I rather grumpily agreed to meet him in Broadway afterwards for coffee and cake. Which he deserved rather more than I did, obviously, but let’s step around that.

On the way back home I stopped off in Willersey, a village which is blessed with a pond, to see if there was any interesting wildlife about. I cheered up immensely when I spotted this handsome male Broad-bodied Chaser, because it’s a dragon I really like, and I haven’t seen any for several weeks now. It’s one of the earliest species to emerge, and though its flight period is said to go on until August I’d pretty much come to the conclusion that it had gone over early, but this is a very fresh specimen and can’t be long emerged.

I’d taken quite a few photos of him, and as I hadn’t seen anything else of interest I was thinking of moving on, when another dragon appeared – and what initially looked like a territorial tussle between them rapidly turned out to be a mating flight. This species mates on the wing, for just a few seconds and while travelling at speed, so to my chagrin I didn’t manage to record the moment; but after they’d separated the female flew around for a minute or so and then began to oviposit. She did this by flying low over the surface of the water, selecting an area where there was a patch of submerged weed, and then rapidly and repeatedly dipping just the very end of her abdomen into the water; after a few dips she would then move to a different place and repeat the process. From time to time the male would leave his perch and overfly her, as if he was checking that she was still working, but then he’d return to the reeds – I guess though that his casual attitude was due to there being no other dragonflies at the pond, and that if there had been other males about he’d have been more protective, until she’d finished depositing the eggs he had fertilised.

My extra photo shows the female – which also looks very fresh, and is much darker than the ochre coloured ones I saw at the beginning of the season. All the shots I had of her actually ovipositing were slightly blurred – my shutter speed wasn’t quite high enough to freeze the rapid, percussive process – but I was pleased to have captured her in flight. 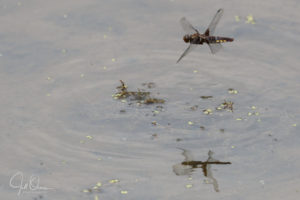