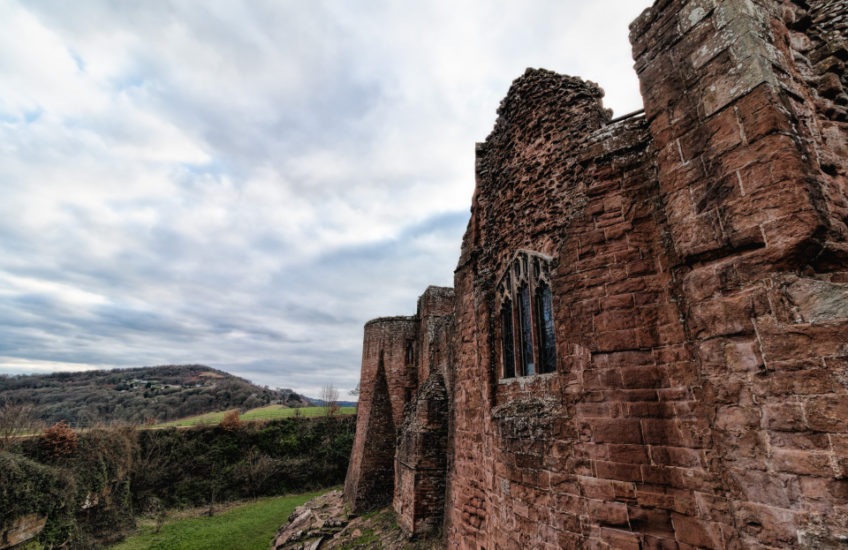 I spent the morning doing boring things: the washing machine door lock broke last week, and having had it replaced a couple of days ago I was still working through a backlog of washing; and then I reconciled some accounts, which always puts me in a good mood. Not.

Then I opened Facebook to see what was going on in the world, and discovered that Nick Kelsh had made this shot his Fan Photo of the Day – not the first time I’ve had this accolade from Nick, but always a lovely surprise when it happens. I then got into fielding nice comments from various people, and explaining how I created the image – and before I knew where I was it was early afternoon, and getting rather late for road tripping.

But I did a quick calculation, decided that I just had time to make it over into Herefordshire, grabbed some gear and quickly set off. My Plan A was to go to Symonds Yat, where I know that there is a viewpoint with a spectacular view down the Wye Valley, but as I drove west some large, low cloud banks started to build up in front of me, and as I came under their shadow the light became blue and murky; so I moved to Plan B, which was to go to Goodrich Castle, a couple of miles further along the A40 from Symonds Yat. I knew that Goodrich was due to close at 4pm, but expected to be able to get there round about 3 o’clock.

Shortly after turning onto the A40 I found myself in two lanes of crawling traffic, with no way of getting off the dual carriageway and working around whatever was causing the bottleneck. Just after I realised that the opposite, eastbound carriageway was completely empty a police car steamed along it, closely followed by a flat-bed truck carrying half a car: there wasn’t enough left of it for me to decide whether it had been an open-top to begin with, or if the roof had been sliced away by whatever it had hit, but it looked like the kind of situation that no-one just walks away from. Shortly after that the eastbound carriageway began to fill with heavy traffic, so I guess that the accident had caused it to be closed some while earlier, and removal of the car had allowed it to reopen.

The westbound queue continued to crawl down towards Ross-on-Wye, going slowly enough to give me time to examine the normally pretty little town, perched on its cliff on the far side of the river, and decide that it in this light it looked horrible. I therefore abandoned the Plan C I’d just been formulating, to pull off the A40 at Ross and take some photos there – and in fact by now I had serious doubts about the whole enterprise, and was seriously considering simply turning round at the Ross roundabout and heading home. But when I got to the roundabout every road except the ongoing A40 was utterly choked with traffic, so faced with the choice between carrying on and possibly getting to Goodrich in time to take some photos, or sitting in another queue knowing that I was going home empty-handed, I carried on.

I got to to Goodrich Castle just after 3.30pm, only to find the car park gate shut and padlocked. By this time I was starting to get cross, so I left the car in the lane, went through a pedestrian gate and marched up to the reception area intending to have a Word with someone. There were A-boards all about the place saying things like CAFE OPEN – but all the entrances to the reception building were shuttered and padlocked, and the only other humans in sight were some people who had also been parked in the lane when I arrived, and who were now following me (presumably under the misapprehension that I knew more than they did).

It was all rather bizarre, but I felt I’d already reached the point of no return so I just stalked through the entrance that said TICKET HOLDERS ONLY BEYOND THIS POINT (I am an English Heritage member, in fact, and therefore sort of entitled) and up to the castle. Needless to say the entrance gate at the top of the causeway was padlocked, but at least I was able to wander around outside the walls and take some photos. I’ve chosen this one because I like the contrast between the ‘hard’ and ‘soft’ elements in it, and because the stained glass window is rather intriguing. It’s a modern window, but apparently constructed of old glass: there’s a photo of it taken from the inside of the castle in this Wiki, which also has as much information as you could possibly ever want about the history of the castle.

It would be fair to say that a certain amount of fartnarkling has happened to this image, but the Herefordshire stone really is this colour – as is their mud. For a few years in their early teens the Offspring came to a PGL summer camp in the hills up above Ross, and no cleaning product known to man (or even woman) could remove the red staining from clothing they’d worn during mud activities – we simply had to regard it as an ancillary cost, and throw those garments away. As the washing machine is already lying down in a darkened room with a damp cloth on its forehead after running around the clock for two days, I was careful not to create more laundry by leaning on any walls while taking my photos today!

By the time I left Goodrich the traffic had dispersed and I had a good run home, so on balance the visit was worthwhile even though it was very disconcerting to find the castle closed when it should have been open. I’ll run over again and have a proper look round it when the irritations of today have fallen into the Potholes down on Memory Lane.