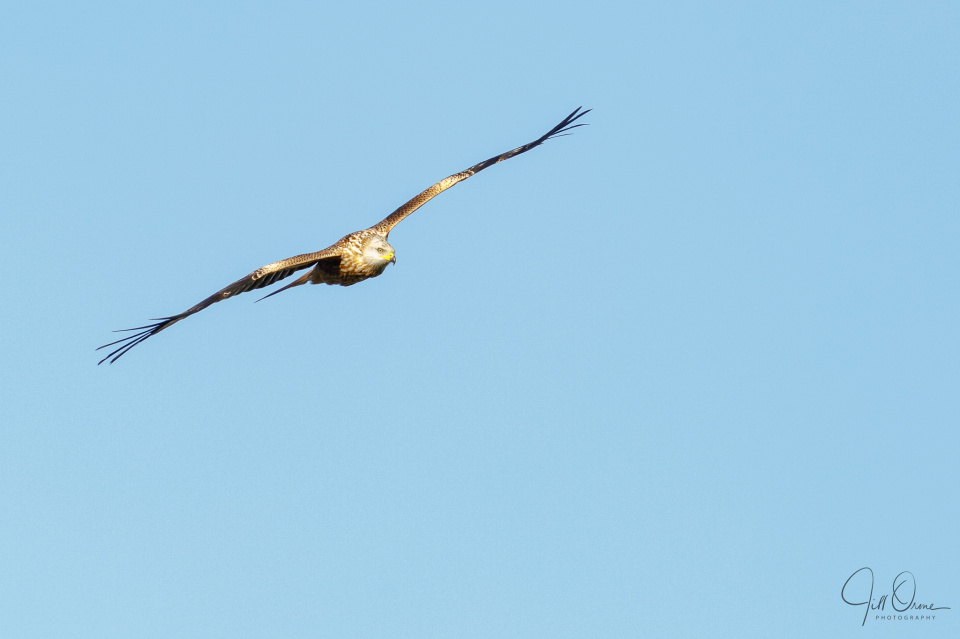 My usual route up onto the top of the Cotswold scarp takes me past the Cotswold Farm Park, and then up a steep hill, on the far side of which lies the village of Guiting Power. A couple of weeks ago I stopped part way up the hill to photograph a pair of red kites, which were hunting over the farmland on the south side of the road; and today when I reached the top of the hill I stopped again, because what looked to be the same pair of kites went up just in front of me, and began quartering the Guiting Grange estate to the north of the road.

The first thing that occurred to me about these kites is that living so close to Guiting Grange probably isn’t the brightest of ideas, because this is a commercial shooting estate (though kites are mainly carrion eaters, so not really a threat to game birds). But stepping past that thought, I began to wonder about the birds, one of which is larger, paler, and more assertive than the other – and easier to photograph, because it doesn’t seem at all fazed by the presence of a human. Red kites are monogamous, and the pair bond can last for life, so it seems likely that this a breeding pair and (as red kites in the UK don’t migrate) that this area is their breeding territory. Males and females look very similar – in fact one of my books lists no difference at all between the sexes – but it’s usually said that the female is slightly larger than the male, so I’m going to hazard a guess that this gorgeous creature is Mrs M. milvus.

The nice thing about photographing her from the top of a hill was that for some of the time she was hunting below me (allowing me a great view of her upper wing markings), and for some of it she seemed to be flying almost level with me, as you can see in this image. Although kites will hunt quite low to the ground, it’s not all that usual to capture them head-on against the sky, and I really like the way she presents in this shot. My extra shows the same bird from below, as she flew almost over my head. 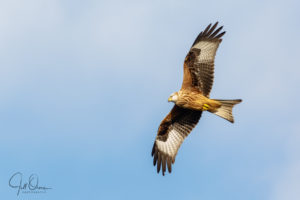 By the way, don’t be fooled by this apparently balmy scene – it was so windy up on the hill that I struggled to hold the camera steady, and about two minutes after this a storm blew through, the kites disappeared, and I had to take shelter in the car.

The owl field today was all about the company and the conversation – the owls didn’t show, and neither did the hen harrier. But I was happy to get a few shots of a male stonechat in some lovely late afternoon light – one of which I’ve posted to Facebook, if you’re interested in seeing it.