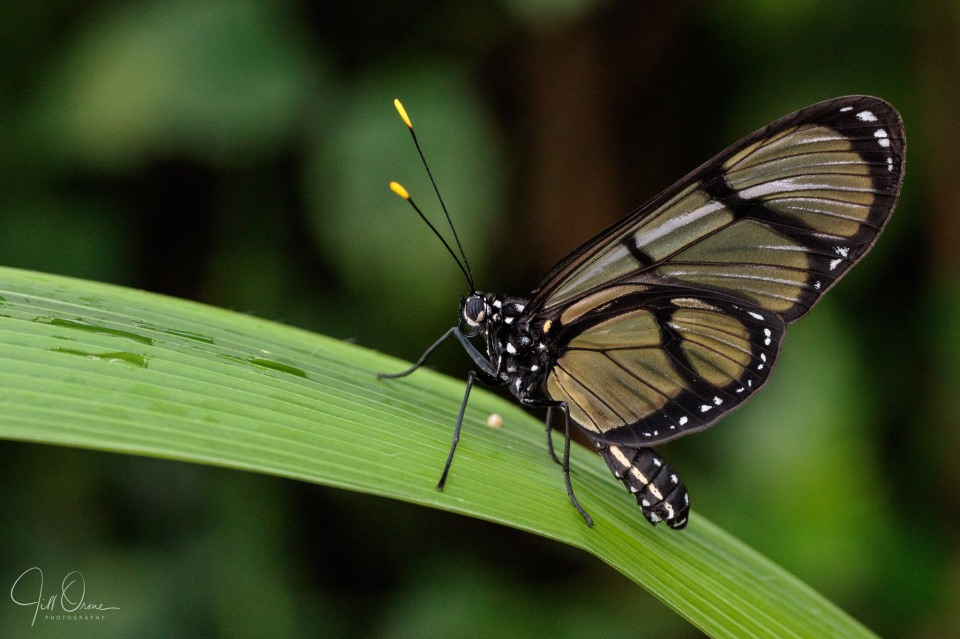 Back in the winter I watched a webinar by the macro photographer Victoria Hillman, during which she recommended a couple of lights which she uses in preference to flash – the smaller and cheaper of which was the Manfrotto Lumimuse. As I’m not a fan of flash photography either, I recently bought one, and today I went to Stratford Butterfly Farm to try it out.

The Lumimuse is a rechargeable high-powered LED, which attaches to the hot shoe of a DSLR without actually being electrically connected to the camera – well, I say “attaches”, but one of the quibbles I have with it is that it doesn’t slide all the way onto the shoe of either of my cameras, because the adaptor is fractionally too wide. R offered to correct that situation for me with a file, but because I hadn’t yet positively decided to keep the light I just pushed it onto the shoe as far as I reasonably could, and hoped that it wouldn’t fall off during use. The other disconcerting thing about it is that it gets very hot – I would guess that I had it turned on for about twenty minutes today, and by the end of that time the casing was too hot to hold comfortably. There’s an in-built feature (allegedly) which lowers the power if the device is getting too hot for safety, but I have to say that I think it’s best used in short stints.

On the plus side, it produces a much nicer light than a flash gun. For one thing, it’s daylight rated light: I had the camera set to 5,000K because it was a pretty gloomy afternoon, and my photos have required almost no colour correction. And the other, really good thing is that it’s sufficiently diffused light not to produce hard shadow, which I find almost impossible to achieve with flash, even if I bounce it off another surface. Because it’s independent of the camera it doesn’t work with the metering system in the way that a flash gun does, and it took a little trial and error to get good exposures, but probably only the same number of test shots as I would do with my flash gun.

My overall impression that it’s a strange little device, with some definite down sides (and, in common with other Manfrotto products, not as well made as I would like it to be), but also with some advantages over a flash unit. Poor light being the curse of the macro photographer, especially in the miserable summer we’re currently enduring, I can imagine using the Lumimuse even in outdoor situations – yesterday’s damsel, for instance, would have benefited from some light on his face.

Enough about the light – what about the butterflies? The main image is a Giant Glasswing, which I’ve chosen to post because it’s the first time I’ve ever seen one; it was sitting very quietly in a dark corner, and I almost missed it, but the yellow tips of its antennae just caught my eye as I was walking past. It’s very different in appearance to the smaller Greta oto, which I’ve blipped a couple of times: the wings of that small butterfly are remarkably transparent, but these are better described as translucent – I could just about make out the markings on its abdomen through them, but couldn’t see the foliage behind it. It’s a butterfly of the rain forests of South America, where the peculiar blotchy appearance of its wings presumably helps it to blend in with its surroundings and evade predators. There’s quite a nice page about it here, if you’d like to know more. 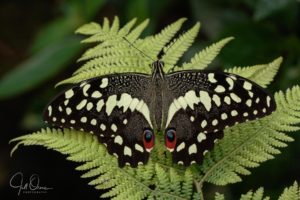 The extra shows a Lime Swallowtail, which is the most widely found swallowtail butterfly in the world – it occurs from the Middle East, right through Asia, and over to Australia. It breeds prolifically, and its larvae are regarded as a pest of young citrus trees, which can be completely defoliated by an infestation of Papilio demeolus caterpillars. I liked the way this one was posing on a fern.

My third favourite shot of the day was of a cocoon, which looked as though it was about to burst open. I’d have liked to see the occupant eclosing, but doubted that it was likely to emerge during the few minutes I had available to stand and wait!