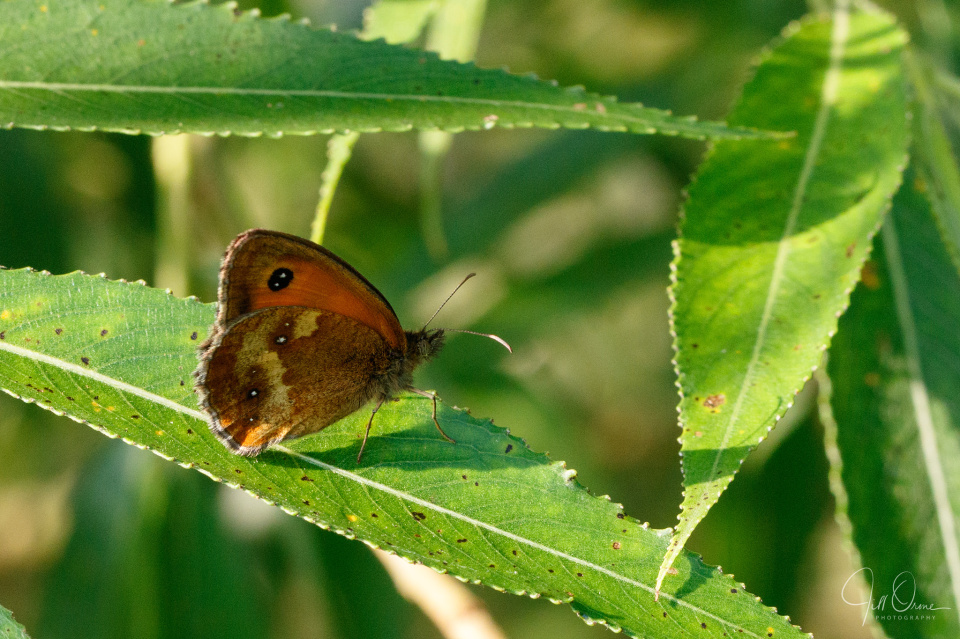 Dealing with a combination of the heatwave and an unexpected joint flare, I was good for pretty much nothing today, and spent most of it sitting in a deckchair in the shade near the wildlife pond, reading a book. Various invertebrates visited the area over the hours I was there, including a beautiful female Southern Hawker (twice), but none of them paused, and I was so far off my game that catching them in motion was out of the question.

By dinner time I had literally nothing on the camera, but then as the sun began to sink the bugs began to settle, and a walk around Tilly’s field netted me a few usable shots. This isn’t the best of them, technically speaking, but I quite like the light and the framing, and it was the first Gatekeeper I’ve photographed this year, which is why it gets its shoulder tapped tonight.

The Gatekeeper is a common brown butterfly in southern England, though it becomes scarcer the further north you go. It produces one generation per year, with the adults usually on the wing from July though September, and overwinters at the larval stage. The adults eat both honeydew and nectar, with favoured plants being bramble, common fleabane, and ragwort. In my garden they also seem to like yarrow and scabious. Females drop their eggs from the air onto patches of the meadow grasses that are favoured by the larvae – which seems a rather casual approach, but must be effective, because the number of Gatekeepers in Britain has risen over the past fifty years.