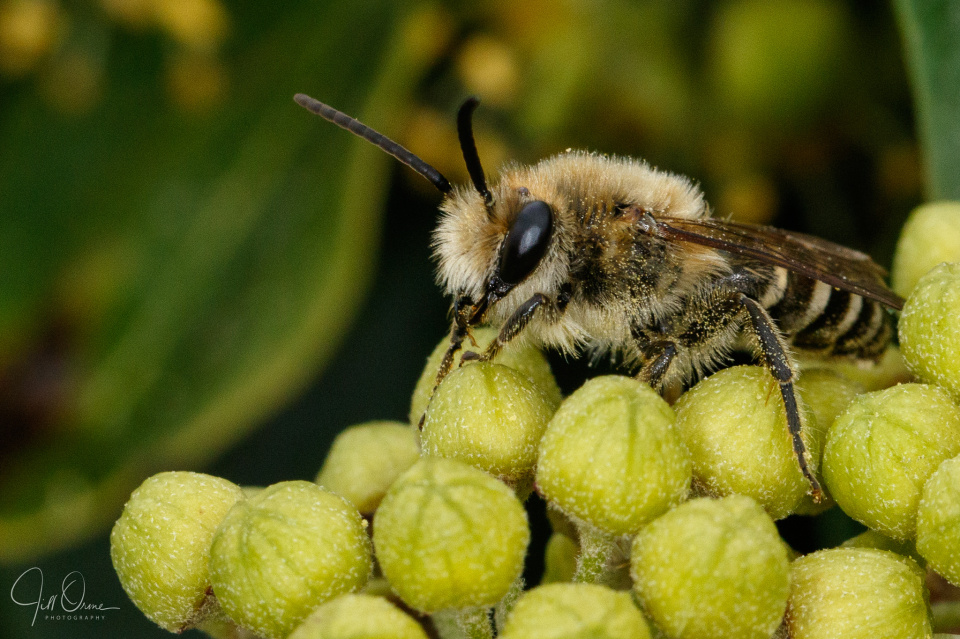 My new ring flash arrived today, so I went for a walk with it and we began getting to know each other. My first impressions are pretty positive: I think it’s fairly obvious that this photo was taken with flash, but it doesn’t have the glaring highlights and shadows you tend to suffer with a directional flash gun, even if you’re using a diffuser. The new unit is also lighter than my old speedlight, which is welcome.

The brief for Tiny Tuesday today was something soft, and I think this little male ivy bee fits the bill. Certainly I can’t look at him without wondering how soft that furry pile would be if one were to stroke it. This shot happened to catch him at rest, but he was in the middle of a grooming routine; I almost posted the next image in the sequence, which shows him cleaning his left antenna by pulling it through the ‘elbow’ of his bent foreleg, but R prefers this, so I’ve put the other photo on Facebook.

The smallest thing I photographed today was a leafhopper, which made the mistake of attracting my attention by landing on a blade of grass by my foot in Tilly’s field. I’ve become quite interested in leafhoppers, but they’re not fond of humans and I rarely manage to find the photogenically coloured and patterned ones. Today’s was a fairly boring brown and cream, which didn’t help the autofocus to lock onto it, and the photos I took are just record shots – but one of them has come in useful this evening. I spent a couple of hours learning how to create textures in Photoshop, and after making a background that I quite liked I placed the leafhopper on it as a subject. I’ve added the resulting image below – not because I’m proud of it, but in the spirit of: If even I can do this, when I hate Photoshop fartnarklery, then honestly, anyone can. A crisper subject would have made for a more impressive result, but I wanted to practise with a simple shape that was easy to layer. I think the leafhopper (which was only about half a centimetre long, by the way), might be Thamnotettix dilutior, which is a common pest of deciduous trees. 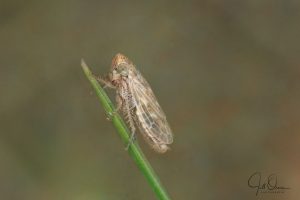