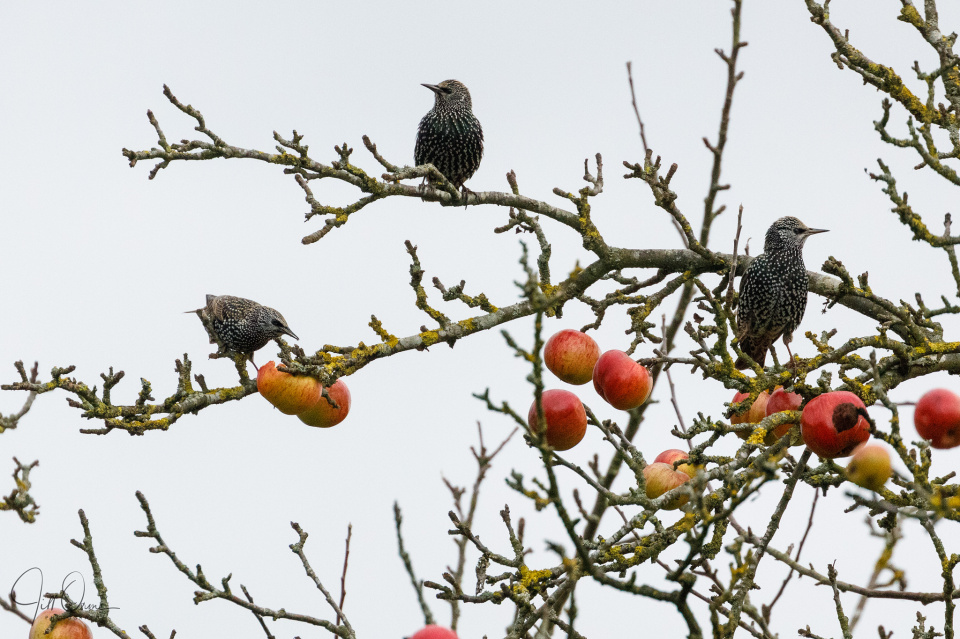 R and I put up most of the Christmas decorations today – a job I don’t enjoy very much, especially now that the Offspring are grown and I can’t make a family performance out of it, but which I still feel I have to do if I’m not going to turn (completely) into Mrs Ebenezer Scrooge. Back in the day I used to try to make sure it was all done in one day, with the packaging put neatly away, and I feel a bit slovenly for having heaps of boxes and bags still sitting around in the dining room – but with a bit of luck and a following wind I’ll finish it tomorrow.

I gave myself a break at lunch time and walked around the village with the camera, looking for winter thrushes in the hawthorn hedges. There were plenty of fieldfares and redwings around, but they were very skittish and flighty, and I’m not happy with any of the shots I managed to take. More co-operative – or at any rate less scared of humans – was the small flock of starlings that landed in this apple tree, and stayed put for some time despite a steady stream of passers-by, several passing cars, and me sneaking right up to the fence to get as close to them as possible.

I know a lot of people don’t like starlings – though I’ve never yet met anyone who doesn’t like to see a starling murmuration – but I find them quite amusing. The tree was still pretty packed with fruit, and the ground around it was littered with windfalls, but there was huge competition among the birds for just a few of the apples, while the rest were completely ignored. The starling on the left side of the photo had already had to assert ownership of its apple quite robustly, and although the other two were sitting looking around at this point as though apples were the last thing on their minds, it wasn’t long before they were sidling along the branch again,  trying to sneak a mouthful.

On my way back home from what turned out to be a two-hour walk, I spotted a squirrel doing an acrobatic manoeuvre to pick hawthorn berries: clutching a branch with its hind feet, it would drop down and hang vertically, and then swing its body forward, grasp a twig that still held some berries, and pull itself forward, paw over paw, until it reached the fruit and could nip it off. This was happening in the darkest part of the lane, unfortunately, so my extra photo was taken at ISO 12,800; but on the plus side, it was so shady that I was able to watch for several minutes before the squirrel spotted me, and by then it had eaten a reasonable meal. 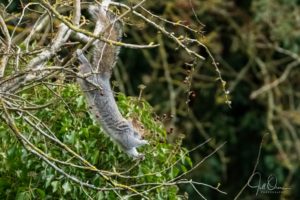