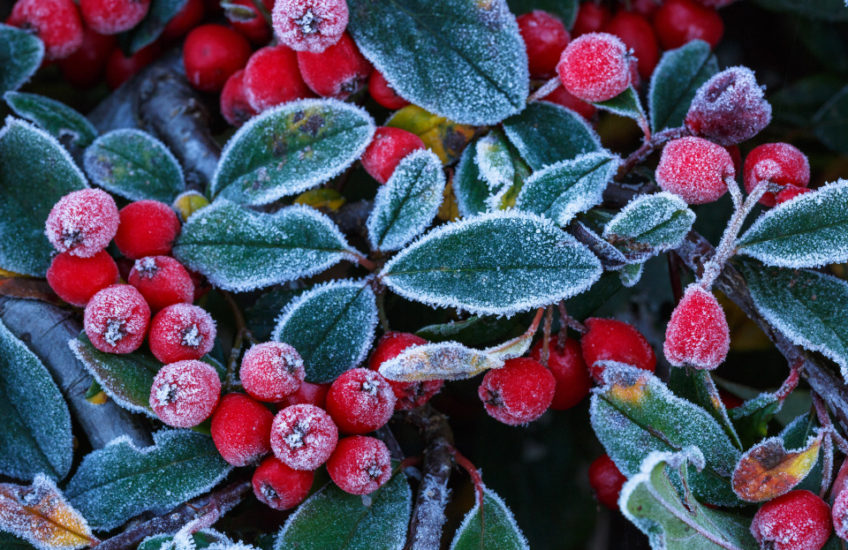 We woke this morning to the first hard frost of the autumn – though according to the forecast it’s likely to be surpassed by tonight’s. By the time I’d filled up all the bird feeders my hands were almost raw from handling cold metal and glass, and I had to go back into the house for a while until I warmed up again, but after that I went for an enjoyable wander around the garden with the macro lens to see what I could find. I photographed all manner of frosty leaves and seed heads, from which R has chosen these cotoneaster leaves and berries for my blip.

I was pottering around the back garden taking my frost photos, when I thought I heard someone walking about down in the wild garden; so I moved very quietly to the dividing hedge and peered through – only to find that the noise was caused by brittle frosty leaves dropping onto brittle frosty grass. More interestingly, the wild garden was full of birds, including a green woodpecker, some fieldfares and redwings, and a blackcap; and I stood for several minutes watching them, wishing I had the Big Lens with me, and making a mental note to add a portable hide to my wish list.

Then a movement up in the closest sycamore tree caught my eye, and turned out to be a squirrel working its way through the canopy, pulling keys off the twigs and eating the seeds. I suppose it’s not especially surprising – if they eat nuts, there’s no reason why they shouldn’t also like seeds – but it had never occurred to me that they might do this and I found it very interesting to watch. It was having some difficulty removing the keys, which were still quite firmly attached to the tree, and balancing on the fine branches while bracing itself against the force it was exerting required some careful weight distribution; but it persisted despite the fact that there were plenty of easier meals to be had nearby (including two feeders full of peanuts) – so I think sycamore seeds must be especially tasty. 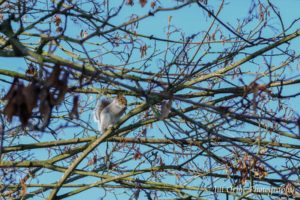 I’ve added an extra, not because it’s a good photo – I was so intent on keeping focus on the squirrel and pressing the shutter button that I didn’t check my exposure, and was very cross when I uploaded the shots and realised how overexposed they all were – but as a record of this piece of behaviour that I hadn’t seen before.