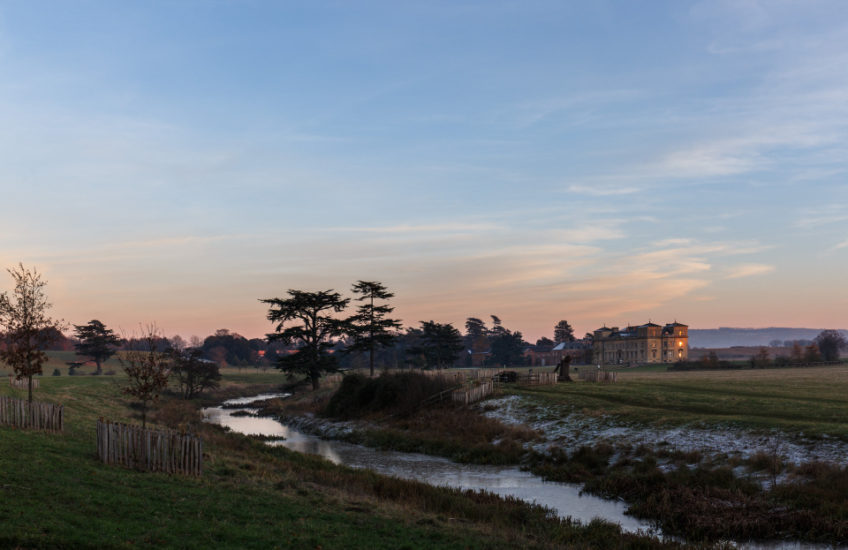 I woke to a spectacular frosty morning, with the rising sun looking like a red ball through the heavy mist. By the time it occurred to me that a trip to Croome might repay the drive I had missed the best of the early light, so I waited until this afternoon to go in the hope of getting late light instead.

I love Croome, and I had just the best afternoon – I walked twice round the park and once round the house, and came away with 202 photos. Even though the sun was out it was still slightly misty, and the temperature only just crawled above freezing even in the middle of the day – in fact much of the surface of the lake and ornamental river* was still frozen when I arrived and was freezing harder by the time I left. By my second circuit of the park my face was so cold that I was getting toothache.

This was my first visit since the summer, and it felt strange to see so little wildlife – the last time I was here the lake was teeming with dragonflies and other bugs, and the house was almost permanently surrounded by a huge flock of House Martins, but now the dragons have died and the House Martins are overwintering somewhere in Africa; and apart from a small flock of garden birds eating at a feeding station in the shrubbery, some hardy water fowl, one pied wagtail and a few squirrels, there was almost nothing to be seen. On the plus side, the summer’s crowds of people were also missing, and at times it felt as though I had the park virtually to myself.

My hope for some nice late light was fulfilled, as you can see by this image, which shows the frozen river* and the last rays of the setting sun catching the windows of the house. I still have about a gazillion shots to process, and it’s possible that by the time I’ve worked my way through all of them I’ll wish I’d chosen a different one – but such is life. About twenty minutes after I took this photo I stopped on my way out of the park and took a panorama looking over the house towards the Malverns, which I’ve posted here.

* You know you’re proper posh when you have your own ornamental river. At one end of the lake there’s a ruined boat house, which back in the day housed the boats in which the Earl of Coventry’s house guests would be taken for little trips around the lake and up and down the ornamental river, which I’d think was probably quite entertaining. I was initially surprised to see how much of the lake and river were frozen over this afternoon, but it’s still water, and I now know that it’s also shallow: a volunteer who stopped to watch me balancing precariously on the sloping edge of the lake to get the angle I wanted for a photo told me that if I fell in all I’d need to do would be to stand up and walk out again, because it’s only about four feet deep.

I wonder if I could persuade R that we ought to have an ornamental river….?