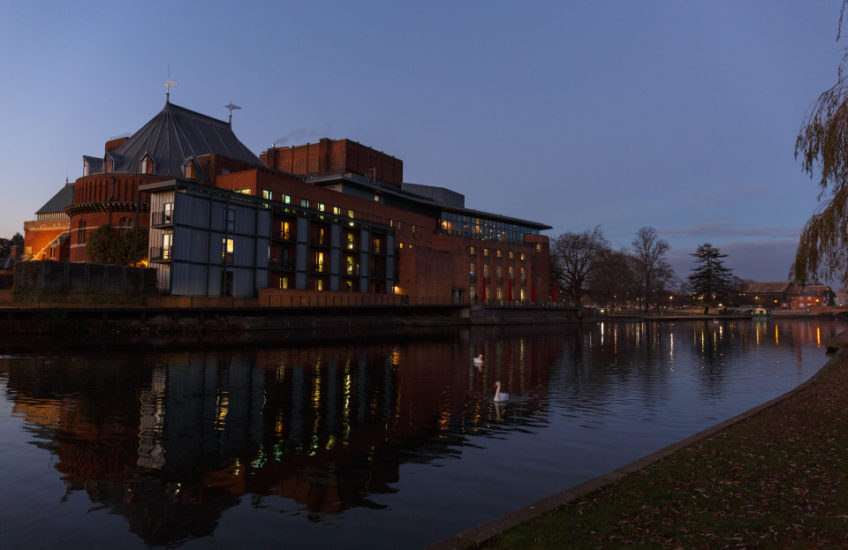 Someone told me a while ago that the new extension to the Royal Shakespeare Theatre in Stratford is designed to look like a ship on the river. I scoffed, I have to say – but this afternoon, seeing it from this angle in the dusk light I suddenly got what they meant.

I spent much of today trying working through a huge backlog of administrative stuff and photo processing, which has built up while I’ve been gadding about having fun. I could quite easily have spent the entire day sitting at my desk, but by early afternoon I was starting to feel slightly unhinged, and as I needed to go out to take a photo anyway, I gave myself a proper break and zoomed over to Wellesbourne for a BGCC workshop session – where I was surprised to see CoffeePotter and Nikonabike, whom I’d never bumped into at camera club before. Blippers… they just seem to get everywhere!

As I drove back towards Stratford I was treated to a spectacular, fiery red sunset, which seemed to bode well for me getting some colourful images; but by the time I’d parked and walked to the river the western sky was almost bleached out, but for a deep golden band at the horizon. I still took a few shots that I quite like, but it was only when I turned my back on the fading light to walk back to the car that I saw this and let out a “Wow!”. I hope you like it too.

I’ve finally created an album of my Gloucester Cathedral shots from last week, and posted it on Facebook, if you’d like to see more of that extraordinary building.