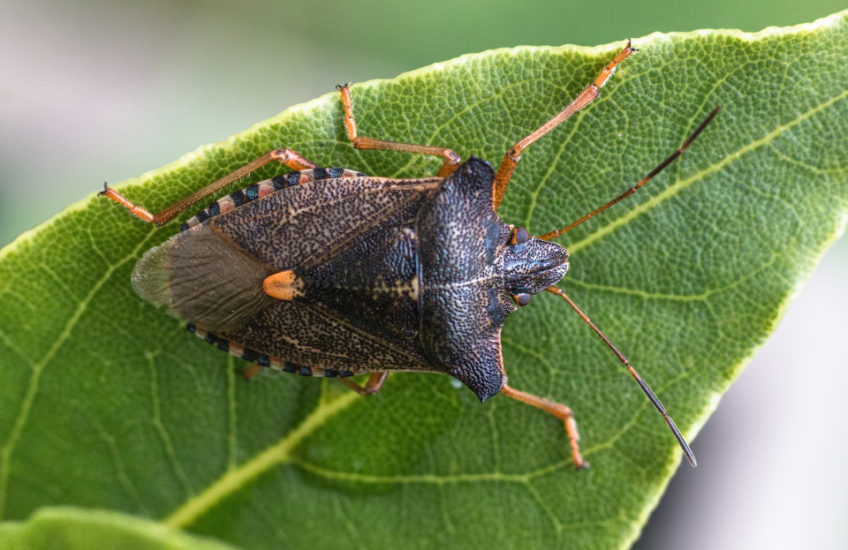 This is the first shield bug I’ve seen this year, so I was glad that it put in an appearance in time for Tiny Tuesday. I first spotted it as I was going out to do some work in the front garden this morning; it was on a leaf of one of the pair of small bay trees we have in pots at the front of the house. An hour later, when I went back to the porch to collect a mug of tea that R had made for me, it was still there – so I decided that it was asking to be blipped, and went and fetched the camera.

As I was photographing it, with different lens/tube combinations and from different angles, the rain started to come down – and by the time I had my shots it was pouring. I was inside for the next couple of hours, but eventually the rain cleared and I went back out to continue clearing a space for some new plants. As I passed the bay tree I glanced down and saw that the forest bug was still there – but I think it must have seen me too, because an instant later it was gone. Maybe it didn’t like posing for photos after all – or maybe it was something I said!

Forest bugs are quite common in gardens – especially if, like us, you have a lot of trees. The adults suck sap from oak, alder and hazel trees – but they also attack fruit trees, and can do quite a lot of damage. They lay their eggs in August, and the nymphs overwinter in cracks in tree bark. When they emerge in the spring they are omnivorous, eating caterpillars and insects as well as leaf sap.

This was taken with the 31mm tube on the 50mm lens. Because the ISO was quite high, and the image still needed to be lightened, it was quite grainy – so I made a couple of layers in PSE, used Topaz Denoise on one and Topaz Detail on the other, and then played with the blending until I got a result I liked.