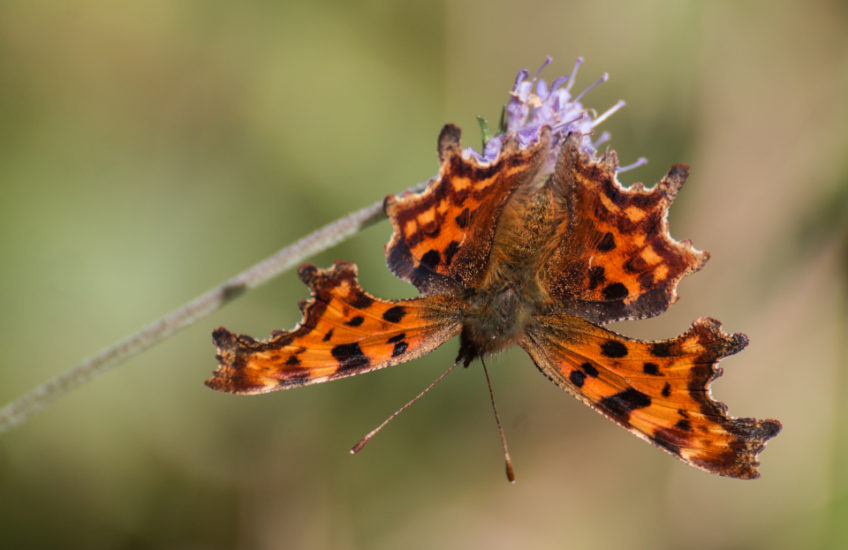 I had one of those rare days today when I was spoiled for choice, photo-wise. In the end I went with this one because it’s the first time I’ve ever seen a Comma butterfly, so even though I don’t think it was my best shot of the day, it was the one I was most excited about.

The first photos of the day were of a crane fly. I hate crane flies, but I thought if I pointed a macro lens at one, I might decide that they’re fascinating rather than repulsive. This did not work. In fact, I wish I could go back in time and tell my six-year-old self: no matter what the grown-ups in the house might say about it, you are not making too much fuss about them – they are revolting.

Then I had to go to Stratford, but I thought it might be nice to swing by Oversley Wood on the way (it’s not on the way, but no matter). It was a lovely day, and I hadn’t been to Oversley for a while – and I thought there might be some interesting creatures about. It’s quite a small piece of woodland – I’d say that you could probably walk the perimeter path in about 40 minutes if you weren’t stopping all the time to take photos – but I was there for a couple of hours, in which time I saw only half a dozen other people. One of these was a young man in a hoodie who suddenly stepped out of the wood onto the path in front of me and nearly caused my heart to stop. Then he saw me, pushed back his hood, smiled and said “Hello” – and it occurred to me that in getting older you lose more than just your youthful suppleness and your car keys: when did I turn into someone who flinches at strangers??

Anyway, humans aside, I saw this Comma butterfly (*happy dance*); a lot of Speckled Woods, of which this one did the best job of posing; a fabulously glamourous Red Admiral; the biggest, nastiest-looking wasp/hornet I’ve ever seen (I didn’t stop to photograph that); and a Common Darter which had come rather charmingly to rest on one of the memorial benches along the path. I then spent quite a while standing by the Conservation Pond, trying to photograph dragonflies in flight and learning a whole new level of respect for those of you who achieve this on a regular basis. I managed this shot of two Common Darters mating with a stray male trying to join in, but completely failed with the huge green one that kept hurtling about the place with its wings making a noise like a football rattle – and this despite the fact that when I finally turned to walk away from the pond I met it coming in the opposite direction. More practice needed!

Finally, arriving home after running my errands, I spotted this caterpillar on one of the bay trees – I don’t know what it is, but I’ve asked the Moth Man for an ID.

All of these photos have taken a bit of culling and sorting out, and I lost half the evening to choir practice (which was great fun even though we all got shouted at) and a rather nasty supernatural thriller on television – which is why I’m posting so late. Now I’m off to get some sleep – if I can sleep after watching Midwinter of the Spirit….