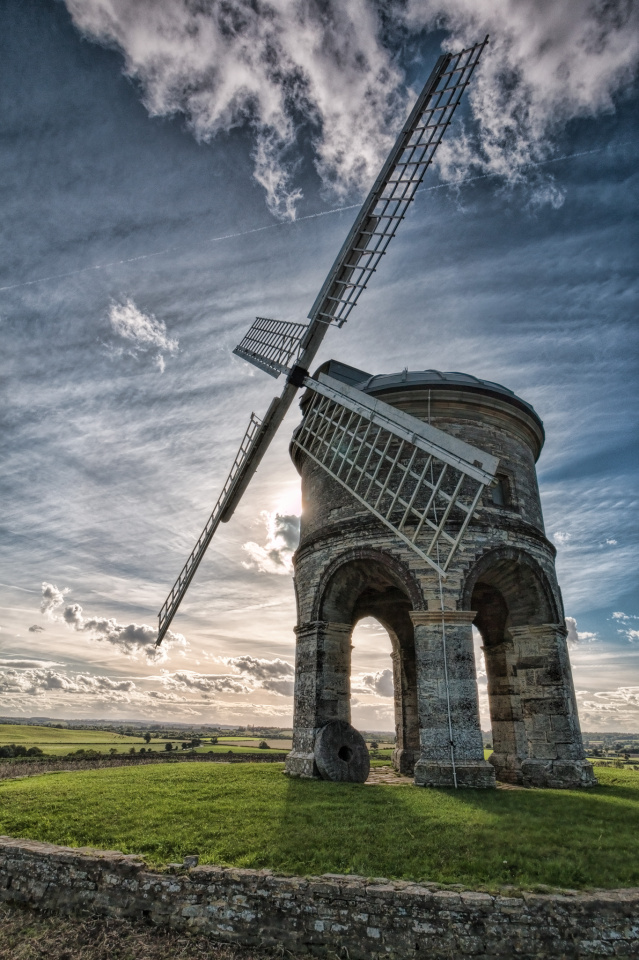 I spent a frustrating and ultimately pointless couple of hours doing on line research this morning – by the end of which I was thoroughly annoyed with the world, and feeling the need to get away from my desk and enjoy some fresh air. It was already a bit late in the day to think about a National Trust or English Heritage trip, so in the end I decided to take my life in my hands and drive down the Fosse (a.k.a. The River of Death) to Chesterton Windmill.

This must be one of the most blipped structures in England, I think – it’s so architecturally interesting, and so unusual, that it’s just crying out to be photographed. Today it had the added interest of a truly weird cloudscape – as you can see here it was all a bit War of the Worlds (that Flickr shot might well have been my blip by the way, except that I didn’t like the way the top sail seemed to be cutting the frame in half). Of course the wide angle lens and then the processing both exaggerated the sky – but it looked pretty strange even as I was standing there.

Something else I ought to try to learn a bit about: cloud forms.

If you’re interested in the windmill but don’t already know about it, there’s a Wiki here. Its environment is currently said to be under threat from Stratford District Council’s (lack of a) housing policy: there is a proposal in the planning system to put 3,000 houses on a piece of land known as Gaydon and Lighthorne Heath, about two miles to the south, which campaigners say would have a devastating impact on the surrounding area. Of course, people do have to live somewhere.

Before I go, thanks for the positive reaction to yesterday’s Comma butterfly – it was really nice to have so many appreciative comments. The caterpillar that I spotted on my bay tree is now wrapped in a rather scruffy cocoon, and has been identified by the Moth Man as a Vapourer – I keep wanting to say Vapouriser, which would tell you nothing about the moth, but probably quite a lot about me. I’ll keep an eye on it over the winter and see if it survives and emerges. I’d love to know what sex it is, because there’s a huge difference between the males and females of this species – the males are quite attractive in a mothy kind of way, but the females are just flightless egg-laying machines, and look like big furry bugs. Fascinating – at least, it is to me!