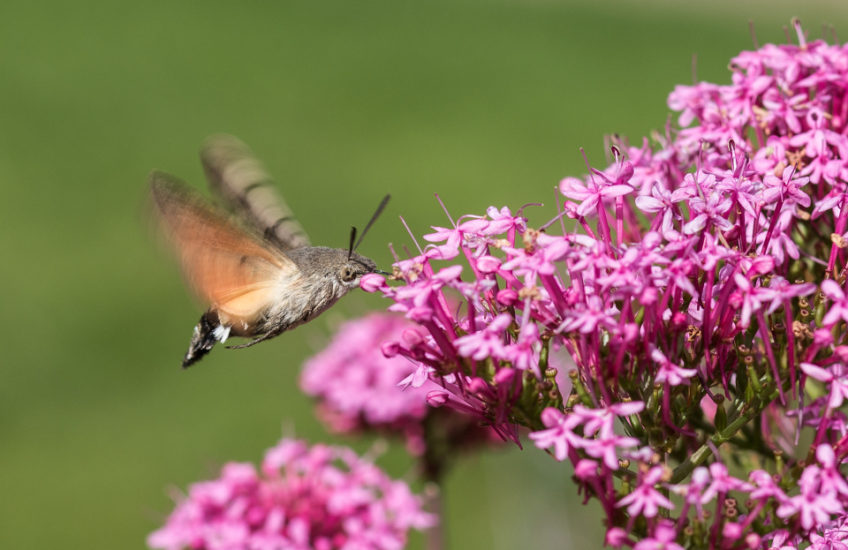 This morning, after months of researching, deliberating, vacillating and researching some more, I finally took the plunge and ordered a full-frame camera body – so within a few days I hope to be shooting with a 5D MkIII. There’s no risk really – it’s coming from a UK company who give a 2-year extension to the normal 12-month Canon warranty – but the whole process made me as jittery as an extremely jittery thing, and after I’d put the phone down I hardly knew what to do with myself.

I thought that if I went up to Hidcote Manor Gardens for an hour I could chill out while taking some Flower Friday shots, so I got some gear together and made for the car. But then on my way across the front lawn I saw movement in the centranthus, and closer investigation revealed a Hummingbird Hawkmoth. I still had the 10-18 zoom on the camera from yesterday, but luckily I’d also put the 85mm in my bag – so I did a lightning lens change, and managed to get a set of shots before it suddenly zoomed past me and departed.

If you’ve never seen one of these moths in action, the way they move is quite unlike most insects – they dart from floret to floret with the proboscis fully extended, but curl it up when they’re moving further. And they are fast! There are some videos on YouTube, but most show the wings apparently moving quite slowly, which is definitely not what you see when you’re trying to track one around a clump of flowers. This is about the best bit of amateur film I found – and doesn’t have the irritating sound effects of some of the others.

Anyway, after chasing back and forth for a couple of minutes and rattling off over 40 shots of this little chap, I decided that Hidcote could wait for another day. None of the images is perfect, but they’re all significantly better than my first set, a couple of weeks ago. This is R’s favourite; the best of the rest are on Flickr.