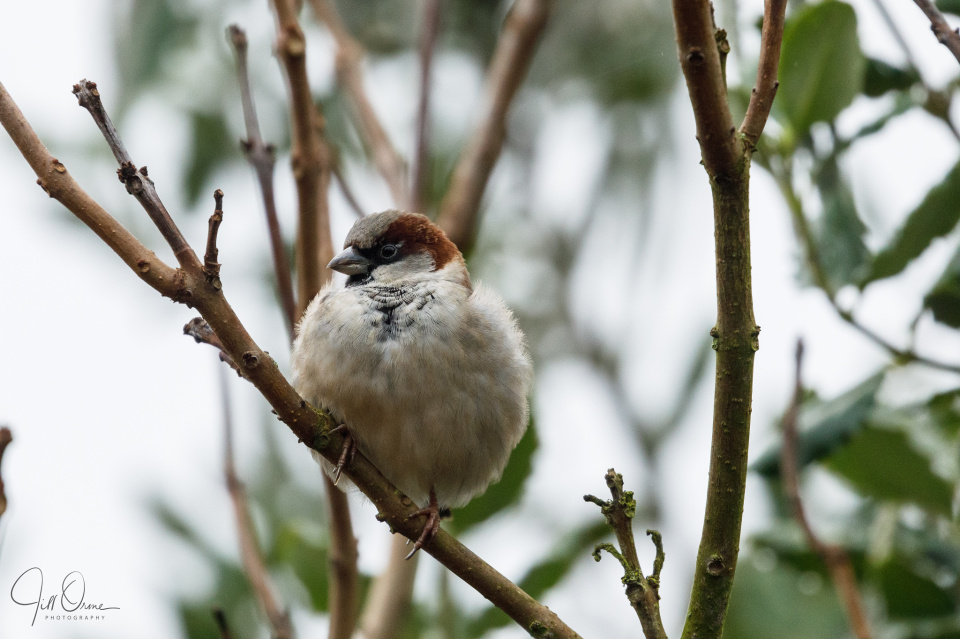 It was another dreich day, as we don’t say in Worcestershire. We do use words such as ‘dank’, ‘dreary’, ‘dismal’, and ‘dispiriting’ – along with some others that blipfoto would probably prefer me not to write here – but (hoping that it doesn’t count as cultural appropriation) I’m going to stick with what is apparently the Scots’ favourite word. Reasons to be cheerful though: it’s now less than four weeks to the shortest day of the year. Yay!

Despite the gloomy light and recurrent bouts of drizzle I decided that I needed to go for a walk around the village if I wasn’t going to end up this shape. I’d been relatively confident of finding some birds to photograph, but I think most of them must have been in our garden, bickering over the food I’d put out, because everywhere else was pretty quiet. I caught some fairly distant shots of a robin singing and a blue tit scolding, but didn’t take anything I actually liked until I happened across this house sparrow in a neighbour’s shrub. I think it’s a youngster, because the photos I took from behind when it was giving me an over-the-shoulder-smoulder show a mix of sleek and downy feathers; but R preferred this puffball front view, and it seems appropriate to the season.

I’ve spent quite a lot of the day working through the photos from my trip to Ham Wall last week, including shots of the marsh harriers that were working the reed beds at sunset. One of the most active birds was a male – they’re smaller than the females, and pretty fast, and yet this one was quite obliging, and provided me with over a hundred images (now severely culled). I’ve put one of my favourites so far onto my Facebook page, if you’re interested.

The other thing I’ve been doing today is reading obituaries. After my phone alerted me to the demise of Gary Rhodes, Jonathan Miller, and Clive James, I barely dared look at it for the rest of the day in case of more bad news. Of the three I’m saddest about Clive James, whose writing I’ve loved for nearly forty years. In the early 1980s I worked very close to Fleet Street, and saw him about from time to time; one day I spotted him walking towards me, and spent frantic seconds as he approached, trying to decide whether to stop him and tell him that his TV review column was one of the absolute highlights of my week. In the event I didn’t have the nerve to say anything, and I’ve always regretted it – if you have the chance to deliver a straightforward compliment, I think you should just go for it.