There were so many owls out and about today that I hardly knew where to point the lens. I arrived home with just shy of 1000 photos, and after a long evening’s culling and processing I still have… far too many; here are two of my favourites (which I’d be thrilled if you’d view full-screen), but there are some others here, if you’re interested. 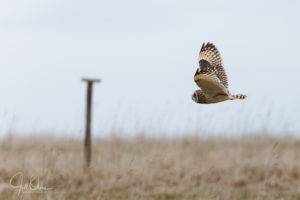 Over the past few weeks I’ve learned quite a lot about short-eared owls, one of the most interesting things being that although there are (I’m told) seven of them here this winter, and in other years there have been even more, they’re extremely solitary: they roost alone, and fly alone – and though they will hunt the same territory, if two happen to meet there’s almost always a clash, which ends with one chasing the other away. Within the next few weeks all of them will migrate back northwards to their breeding territories – but singly, rather than in a group.

One thing I did know before becoming an owl stalker is that they’re silent hunters – but even now I’m able to be surprised by the fact that they make absolutely no noise at all. If you’re looking in the wrong direction when one takes flight, you won’t know that it’s in the air until you happen to turn round, or it floats past you, or some other kind photographer says, “Have you spotted that one?” and points it out to you. At one moment today, I happened to look round just as an owl I hadn’t known was there rose silently out of the grass about thirty metres from where I was standing, and I was so surprised I completely failed to get any kind of focus on it. The first shot in my Facebook sequence shows a bird with its beak open, which I think must have been a warning to another one which at the time was too close – but it was a silent scream. I assume that they’re able to vocalise if they want to, but I haven’t heard any of this group make any kind of sound.

There are numerous entertaining legends told among the Cotswold owlers during long, cold afternoons of zero owl activity, one of which is that a kestrel will sometimes mug an owl for its prey. I’ve heard variations of this tale a number of times, and I have no reason to doubt it, though I haven’t seen it myself. But what I saw today, which I’ve never heard anyone else describe, was an owl attempting to mug a kestrel for what looked like a rodent – though luckily for the kestrel the owl didn’t quite have the speed to catch it, and had to go back to finding its own dinner. If I were a better photographer I’d have some potentially award-winning photos of this scene, but sadly I’m only a better photographer than the one I was this time last year, and that’s still not good enough; however, the beginning of the chase is the last shot in my Facebook sequence, and I also put a photo here that shows how close the kestrel was to being caught.

I hope you’re not bored to tears with owls by now. If you are, I’m sure you’ll be kind enough not to mention it, knowing as you do that the owling season is drawing to a close now, and that I’ll soon be back to boring you with bugs. On the subject of which, as I left the house this afternoon, I checked the pulmonaria and found three plumpies, two of which were fresh and pristine, and the third somewhat battered and partially bald – which I think means that this tiny chap somehow managed, very unexpectedly, to survive last weekend’s cold snap. I tried not to get emotional about it, but…. well, you know. I just hope he manages to hang on a bit longer, until the girls emerge, and he can charm them with the story.