After an hour standing in the freezing wind on the top of the Cotswolds, chatting to three other owlers, the farmer, and the farmer’s dog (who was so bored by all the chatting that he kept bringing me twigs and old weed stems and trying to persuade me to throw them for him), I’d just about had enough. I walked round the corner and down the road with one of the other owlers, to check if there was an owl sitting in a sheltered tree (where he’s been, allegedly, for the best part of a week) – and there he was, looking much they way I felt: grumpy. I managed a photo, which I’ve put in as an extra; it won’t win any awards because the light was so bad I had to push the ISO to 4000, and it’s heavily cropped, but it’s interesting because these owls look so different when they’re roosting than when they’re flying, and because you can just make out his little ears. 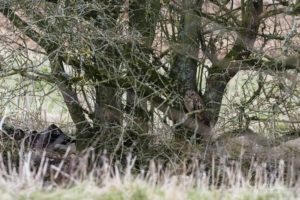 At this point I decided that the owl had the right idea, and sitting down somewhere sheltered was the way to go – ideally in a nice warm car, heading towards a nice warm house and a hot meal – so I put my camera in the car and was just about to get in myself, when I heard the shout: “Short-eared owl!” I thought I was being joshed, but it turned out to be true, and for the next half hour we scooted up and down the road in pursuit of two owls which seemed to be playing a game of hide and seek with us in the rapidly fading light. The autofocus was struggling in the murk, and very few of my images are worth keeping, but as R said, you only need one – and this is that one.