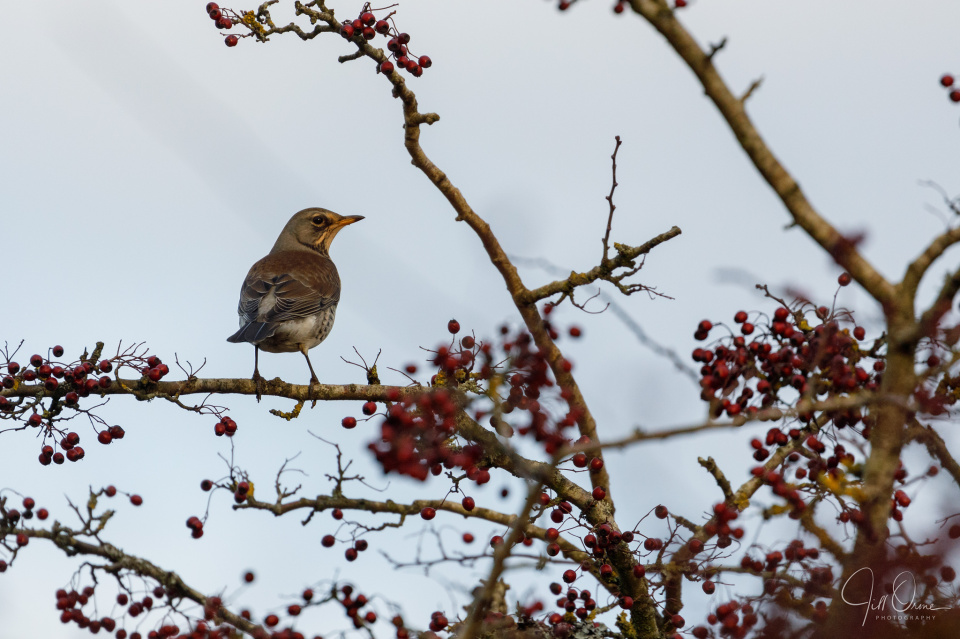 When I arrived at the owl field today the lane was strangely quiet – I think that some of the usual suspects have deserted Gloucestershire for Somerset, where short-eared owls are rumoured to be showing well at Steart – and a couple of the people who were there told me that there hadn’t been any raptor action all afternoon. Knowing that I’d surely hear if they saw anything exciting, I went for a walk to see if I could find anything else, and found myself stalking this fieldfare, which was berrying from the hawthorn trees along the lane.

It knew that it was being followed, and flew onwards a couple of times, but eventually I managed to catch it having a bit of a think, and nicely lit by the late afternoon sunshine. I’ve been trying for about three weeks to get a reasonable shot of a fieldfare, and I was pretty chuffed to manage it today, courtesy of the extra length I now have on the Big Zoom.

Also beautifully lit were the small congregation of golden plover that were practising their formation flying over the field of winter wheat on the south side of the lane. I’ve added one of my favourite photos of them as a first extra. 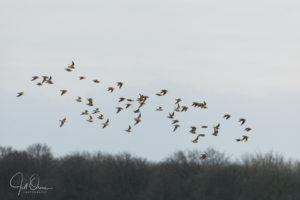 I was still wandering along when the Hilmobile turned into the lane and pulled up alongside me; but when Hillyblips drove on to park at The Wall, I turned back and joined her, and we stood and chatted until the sun set and the glorious light disappeared. At that point everyone began to pack up their gear, and I walked back to my car, put the camera on the passenger seat, went to the boot to dump my jacket, glanced over the wall into the field…. and saw, first a hen harrier, and then almost immediately a short-eared owl.

By this time the sun had been down for about ten minutes, and the field was so dark that I could only see the birds when they were silhouetted against the sky, but of course I grabbed the camera back out of the car, and  began rattling off photos. Most of them went promptly into the trash as soon as I uploaded them and saw how poor they were, but I had to keep the ones of a brief encounter between the two hunters, who looked as though they were going to have a confrontation, but then thought better of it and went their separate ways, ostentatiously ignoring each other. I’ve put the “WAAAH!!!” photo here as a second extra, but the full half dozen are on Facebook, if you have a high enough tolerance of sky-high ISO to want to see them. 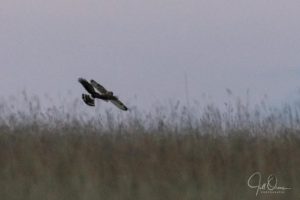