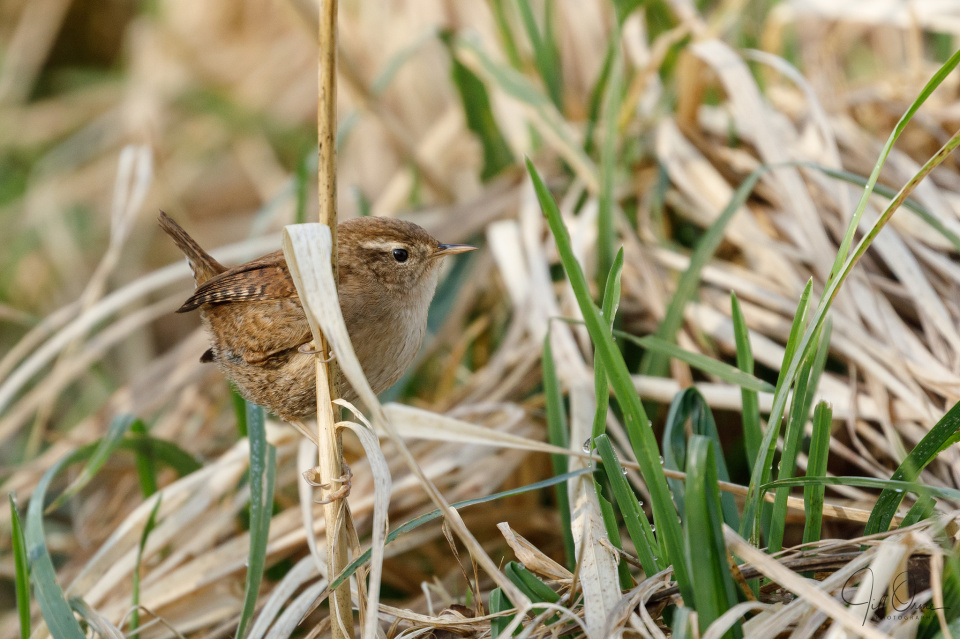 I got out of the car at the owl field this afternoon, and immediately got a Bad Feeling – it was sunny, but there was a vicious wind slicing across the plateau, and as we’ve discussed previously, owls don’t like to fly in windy conditions. I walked up and down the lane and chatted to a few people, most of whom agreed with my prediction. But hope springs eternal, so I stayed.

I did eventually discover that there was an owl, I think almost certainly Fat Furry, sitting in a tussock of grass about fifty metres from the wall. I wouldn’t have spotted her, but one of the other birders had been watching her through binoculars for two hours already, and pointed her out to me. His report was that she’d barely moved a muscle during that time, and I’m able to confirm that she continued in the same vein for the next two hours as well. We were briefly hopeful when a cock pheasant marched across the field on a collision path with her tussock (none of us would have dreamed of invading the field ourselves to put her to flight, but we were all, I admit, egging on the pheasant to kick her into life), but when he was only a couple of metres away he realised that he was the subject of a Death Stare, and after a few moments of thought he turned and quietly tiptoed away. She then closed her eyes and went to sleep.

I finally became convinced that it wasn’t going to be an owl day when I saw first a buzzard and then a red kite overfly the field, and get away with it. Usually one or more of the owls will go straight after these large raptors and chase them away (surprisingly because the owls are so much smaller), but today they left them alone. That red kite might have been my blip, but for the fact that during one of the walks I took to keep my circulation moving, a twittering I couldn’t identify attracted my attention, and when I tracked it down it turned out to be coming from this little wren. It was busily fossicking around in the rough close to the wall while chatting away to itself, and though it could see me quite clearly seemed unconcerned, just carrying on with its day while I watched it and shot a burst of photos. I’m very fond of wrens, because although they’re tiny and dumpy they’re also busy and feisty, but because they spend so much of their time ferreting about in undergrowth I find that they rarely give good photo opportunities – so this is definitely my photo of the day.

After I’d endured the wind and cold for two hours a large cloud bank rolled in and enveloped the field in Stygian gloom, which was the final straw, and I called it quits and went home early. I’m almost certain that by tomorrow morning I’ll have warmed up again.