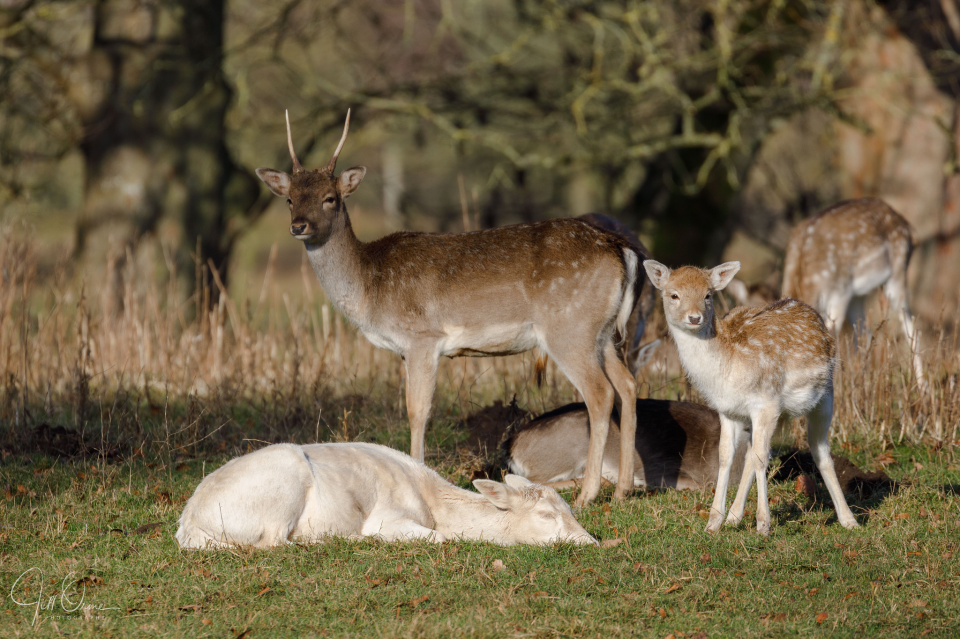 This morning R and I took our “visitors” to Charlecote for Compulsory Fun. In the end I think I can say that a good time was had by all of us, though the whole process of gathering everyone together and getting there seemed to take about twelve hours, and reminded me of what an exhausting business parenthood can be.

With the rut over, the fallow bucks have retreated to their own, relatively peaceable, boys’ club, leaving the does and youngsters in peace on the other side of the park. I was rather taken with what looks like a family grouping here: last year’s fawn and a yearling pricket standing guard over Mum. She is very likely to be pregnant, and looks it – I’m pretty sure I spent large stretches of time flat during both of my first trimesters.

The train of thought I had about this caused me to wonder whether mammals other than humans experience morning sickness, so I did a bit of research into the question. The quick answer is that nobody seems to know for sure, though some dog breeders say that their bitches show food aversion during the 3rd and 4th weeks of pregnancy, and some zoo keepers believe that they see something similar in chimpanzees. But there’s still debate about the mechanism and biological significance of morning sickness, and if the popular theory that it’s nature’s way of discouraging pregnant women from eating potentially harmful foodstuffs at a critical stage of foetal development is correct, it may be a less necessary protective device for mammals which have a better sense of smell than we do, and generally manage to avoid eating things that are poisonous to them.