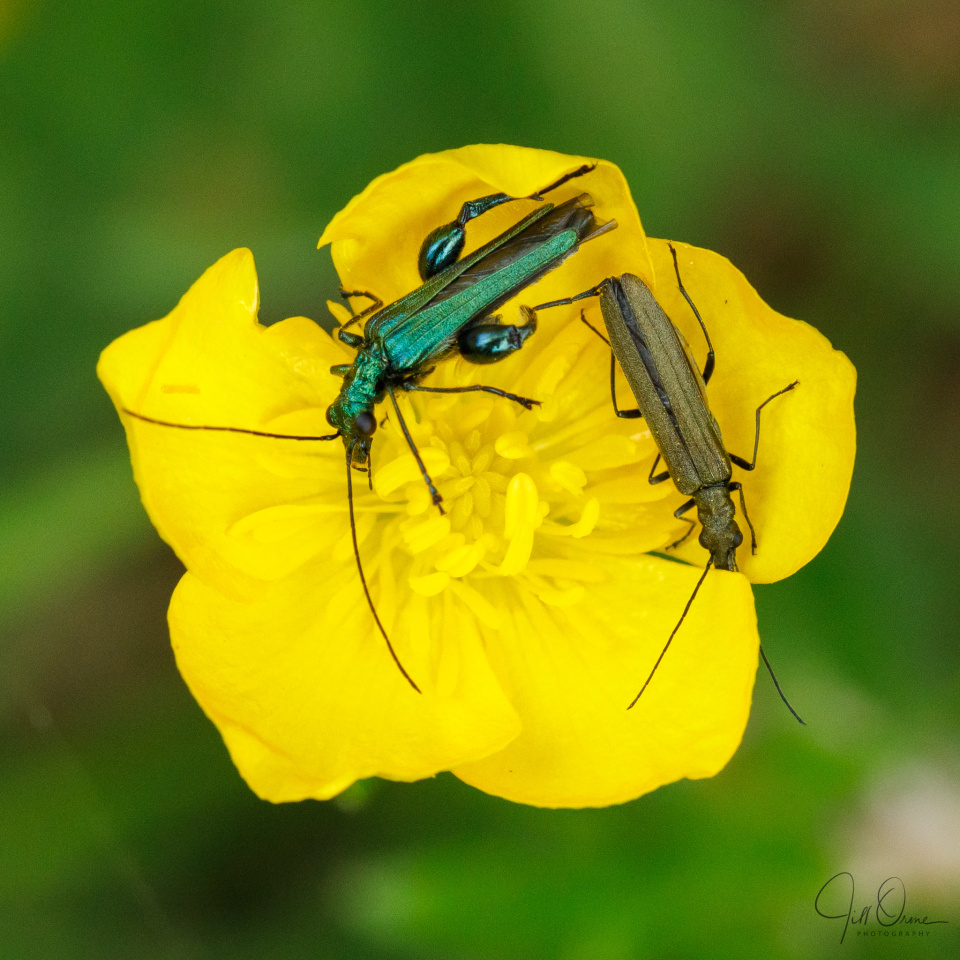 I took the cameras and went on an invert hunt around the village this morning, so that R could do some recording without the risk of me absent-mindedly slamming a door or something, and ruining his work.

By far my best find was a female Eristalinus sepulchralis, which caught my eye as I was stalking a drone fly around some ox-eye daisies in the butterfly field*. She was so far away that I couldn’t tell what I was looking at until I’d rattled off a few long-lens photos, and while I was checking the back of the camera and getting over-excited about finding a species I’d never seen before, she took advantage of my distraction and quietly sneaked away. But despite only achieving grainy record shots I was delighted with my new record – especially as E. sepulchralis has suffered a steep decline in numbers over the last few years, most probably due to loss of habitat. I hope to find more specimens around the damper parts of the village in due course.

When I saw this pair of beetles I assumed that they were male and female Oedemera nobilis, because they’re extremely common around these parts and are just coming into their season. The fact that they were clubbably sharing a buttercup without either of them apparently thinking of sex was quite surprising, but I thought it made for an interesting photo, showing the sexual dimorphism that’s so pronounced in this species. It’s only on closer viewing this evening that I’ve realised my mistake: the guy on the left is indeed a male Oedemera nobilis, with his deep metallic green cuticle, and the thunder thighs he uses for intimidating his rivals and impressing the laydees. But the duller beetle on the right is the wrong kind of green and has more parallel-sided wing cases, and is therefore one of the other false oil beetles – I think almost certainly Oedemera virescens, which averages around the same size as O. nobilis and inhabits the same kind of territory. Male O. virescens also have slightly swollen thighs, though they’re less obvious than those of O. nobilis, so this specimen is a female. What I’ve learned from this is that I need to look more closely at these little green beetles, and not make assumptions when I’m recording them.

* Sadly, for some while now, and still today, the absence of butterfly field.