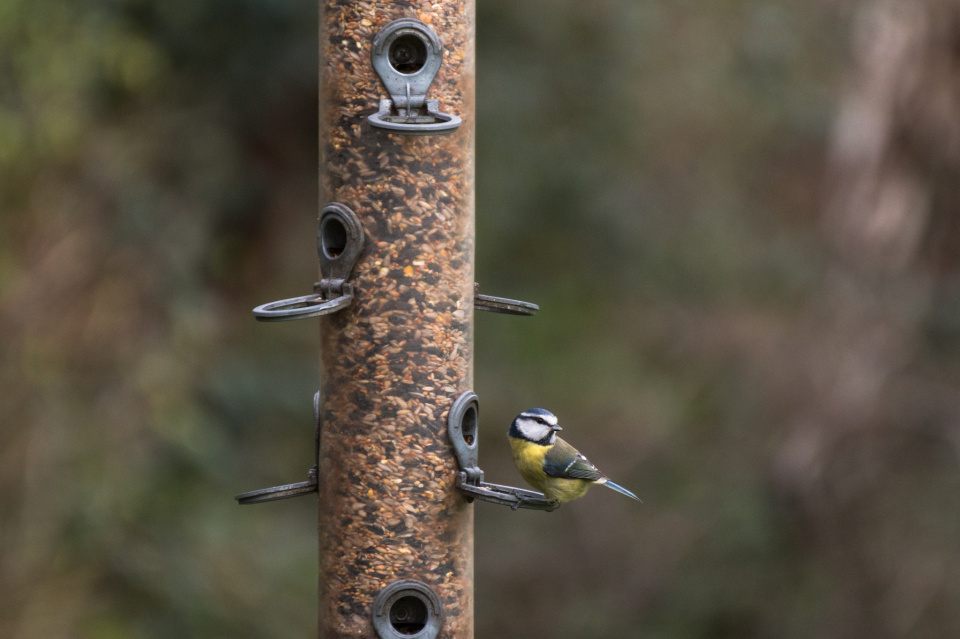 Although I don’t think the birds see it in quite that light.

The nearest bird feeders to the house are a good ten or twelve metres from the back door, and I don’t have a lens long enough to do justice to something as tiny as a blue tit at that distance – especially in the appalling light we get here through much of the year. Today I was out topping up all the feeders, and making a mental note to buy yet more food, when I found myself wondering if I could get the birds so used to my presence in the garden that they would let me get to within sensible photography distance of them. If not I’ll have to buy a portable hide, and while R is highly amused at the thought of me sitting in the middle of the lawn in a little personal camouflage tent, I’m not convinced that I would find the reality as entertaining.

For a few minutes we all played a little game in which the birds came to whichever feeder I was facing away from, and then retreated into the laurel tree  the instant they saw my head move. But after a while the bolder ones began to hold their ground even while I was pointing the camera at them, provided I made no sudden movements, and eventually I was able to step onto the lawn and sit on the patio wall. This put me maybe three metres away from the feeders – still too far away to pick up much feather detail with this rig, but overall I was reasonably pleased with the shots I took. Shooting from the same distance with a 400 prime on the 5D would have given me even better results (said she, busily talking herself into the purchase of yet another lens).

All today’s shots were of blue tits, great tits and a coal tit – the finches and sparrows resolutely refused to play at all, descending in a squabbling horde as soon as I went back into the house, but I think in time they would get used to me too. One of the problems of a garden as big as this is that it’s possible for wildlife to avoid humans almost completely, so it’s not surprising that they’re fearful – but as I pointed out to them I am the Provider of Food, and therefore, surely, more to be welcomed than avoided.

I don’t think they’re yet convinced, but I’m prepared to persevere.