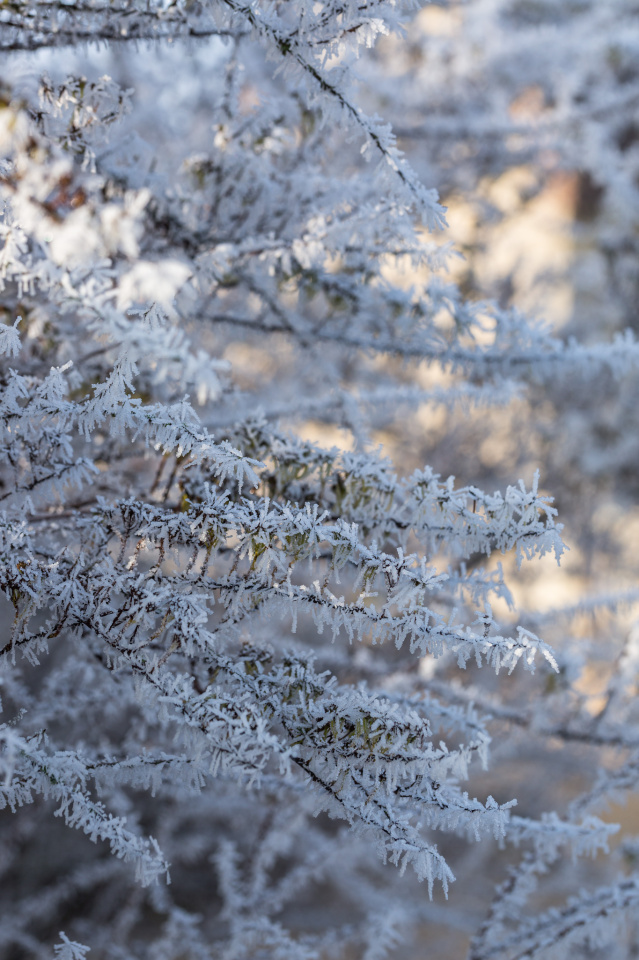 The freezing fog returned last night, and was much thicker – when it finally got light this morning, the garden looked like this. Arthur went out straight after breakfast and hunted scents noisily for quite a while, but it was about 11am when I decided that if I wrapped myself up like a Polar explorer it might be safe to venture out with him for a walk. Just as we set off the sun started to break through the fog – which was just as well, because the scents on frozen ground are fascinating and he needed to sniff every blade of grass in the village, so getting around a one-mile circuit took well over half an hour.

As I’d been standing around on various bits of verge, waiting for He-Who-Would-Not-Be-Moved, I’d been stopping myself from going completely insane by mentally framing some images; so once I’d dropped the hound back at home I took the camera and went back out in search of the shots I’d spotted. By now the moment had slipped away for many of them, because the sun was getting stronger and melting the hoar frost, but I captured what I could. Half an hour earlier this meadow (which I still think of as Tilly’s field, after a long-departed horse which used to live there) had been entirely white, but I still liked the view enough to think it was worth photographing.

Fortunately this shrub is on the north side of a large converted barn, so the sun hadn’t reached it and you can see how heavy the hoar frost was. The background glow on the right side of the image is the sunlit south-facing wall of another barn.

Later in the day I had to go to Stratford to run a couple of errands, and as I was walking along the river I happened across the Swan Whisperer again. He had a friend with him today, but this swan seemed unperturbed by the presence of a second human. I also got some reasonable shots of gulls and tufted ducks, and managed to collect another dog for my album – so all in all it was a good day, photographically speaking at least.