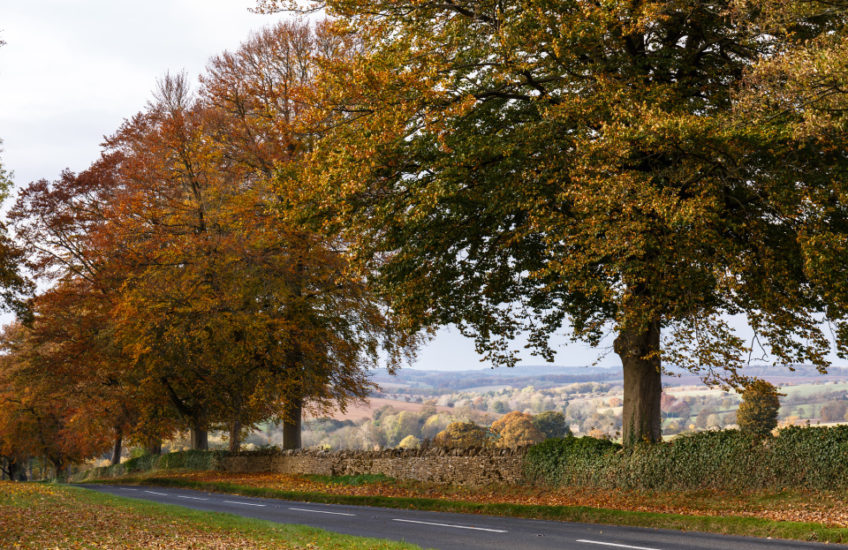 I went to Stow on the Wold at lunchtime to have my hair cut; as I zoomed along the Cotswold Edge the light was lovely and the countryside was beautiful, but I was running late (as per), so I couldn’t stop to take any photos. That wasn’t a problem, I thought, because I could take the scenic route back home afterwards – but no sooner had I set off along the scenic route than the light began to fade rapidly. I was only a couple of hundred yards out of Stow when I pulled into a field gateway and grabbed this view northwards and one in the other direction towards Lower Swell – and that was all the autumn colour I managed to capture today.

This road, which runs from Stow through to Toddington, and eventually on to Tewkesbury, also passes Snowshill, and I thought it might be worth turning off and braving the rutted, single track lane which goes to the village and the Manor. The weather has turned cold and windy now, so it’s likely that most of the leaves will be down very soon, and even in the poor light I hoped to get a few more autumnal shots – but it wasn’t to be: for some bizarre reason the Manor is only open at weekends during November, and I didn’t fancy trespassing.

Instead I carried on down into Broadway, did a little shopping, had a chat with a very fine Jack Russell terrier, and popped into Leaf & Bean for a coffee. As I walked towards an empty table I caught sight of myself in a mirror, shuddered at my appearance, but consoled myself that the risk of me being seen there by anyone I knew was pretty small. A couple of seconds later however, my name was spoken – and there was mab1943, sitting at the next table with Mr Mab and a couple of other people. Blippers…. they turn up absolutely everywhere!