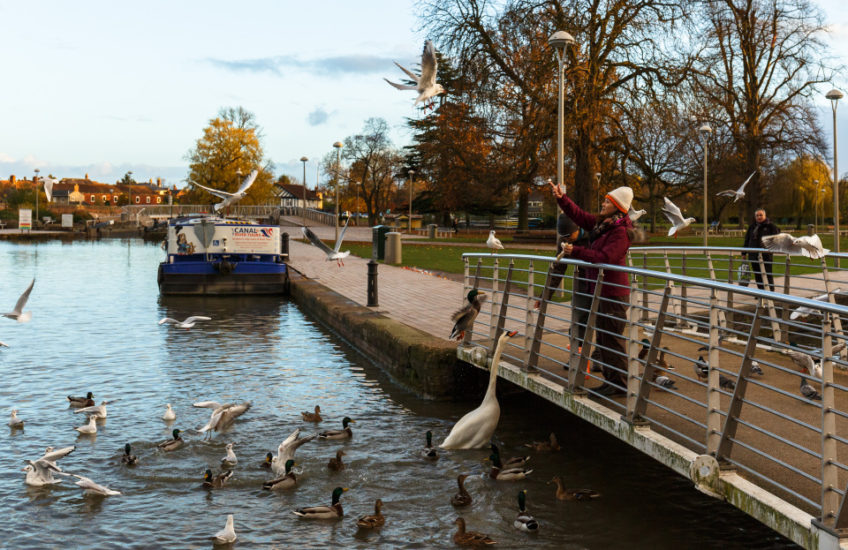 This afternoon I went (against my better judgement) on a BGCC photo walk. The weather was vile – dark and cold, with a slicing wind and occasional flurries of icy rain – and Stratford was almost devoid of human life. Five minutes out of the car and I was shaking with cold, and cursing myself for not staying at home.

We harassed the wildlife down at the river for a while, trying to get it to do something interesting, and failing; and then we headed into the middle of town in the hope of finding some people. Arriving at Henley Street we did indeed find a large number of people: a film crew had taken over the central section of the street, around Shakespeare’s Birthplace, filming crowd scenes for (I would imagine) the upcoming David Tennant film You, Me and Him, which has been shooting on location around Warwickshire for the past few weeks. As you would expect we were delighted to find something potentially interesting going on, and began happily snapping away.

Almost immediately a young woman with a serious attitude problem marched up to me and told me to stop: “You can’t take any photographs here, because we’re filming”. I was about three words into my response that in fact I was perfectly entitled to take photographs on a public street, when our ARPS-in-Attendance swooped down, brandishing the Fiery Nikon of Righteousness, and gave her a right sorting-out. After a few minutes of confrontation, a wiser member of the crew pulled her away, and as she went, her parting shot was “Well, let’s hope we don’t see any of these photos on social media.”

Yes, let’s hope that, shall we? There’s certainly no law against hoping things in a public place.

Sadly, it turns out that the process of filming several young men in festive headgear walking along a street is extremely boring, and makes for equally boring photos. The best one I got is here as an extra: the woman with the phone was filming the man in front of her talking into a microphone; the large person in the background with the Santa outfit and the disapproving expression is one of the Actorrrrrs. 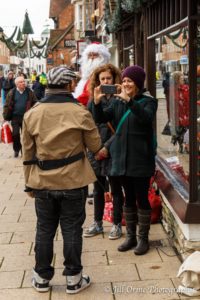 Shortly after this the street filled with trucks and minivans, and the excitement removed itself to its next location – at which point it began to rain again, and our little troupe of togs decided that enough was a sufficiency, and disbanded. I thawed out over a coffee and then headed back towards the car, arriving at the Bancroft Basin to find these people feeding the birds, in the first nice light I’d seen all day. I stopped to watch the aerial antics of the black-headed gulls, and wound up taking over a hundred shots of the scene*.

I’ve chosen this one partly because I like the expression on the woman’s face, but mainly for the hovering mallard: in all my years of hanging around watching water birds and waiting for them to do something interesting, I have never seen a duck do this before. He only managed it for a couple of seconds before his strength gave out and he went back down onto the canal – but still, it’s pretty impressive. I look forward to the day when the black-headed gulls have some serious competition in the aerobatic department.

* N.B. White bread harms all water fowl. Photographers who just take advantage of the situation without saying anything really ought to be ashamed of themselves**.