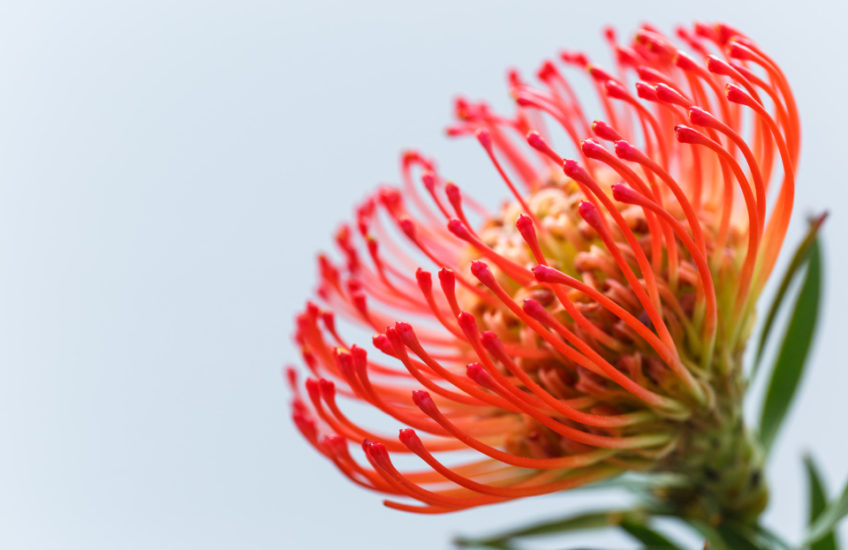 Last week’s exotic flowers have proved to be good value after all, as they keep on giving: here is a different protea flower to the one I photographed on Tuesday, as a contribution to today’s Flower Friday challenge.

R and I went into Stratford this morning to run some errands, and after coffee we split up, he to collect a guitar from the luthier, and me to walk along the river in search of photographs. The only shots I found there were of some feral geese goose-stepping, but I did have a very interesting non-photographic encounter with the town’s Swan Warden, who was attempting to persuade some swans back into the river down by the chain ferry.

He told me that he has been living in Stratford for nearly 40 years, and that when he arrived there were no swans at all on this stretch of the river, because they’d all succumbed to lead poisoning and died. He has been tending the swans here since the first new pair arrived about 35 years ago, which he named Tom and Roxanne after his then-boss and then-girlfriend. Now there are about 40 swans on the Stratford Avon, living on average to around the age of 25.

Interestingly, he’s not especially worried about people feeding bread to the swans, provided they throw it into the river so that the birds take in water when they eat it – he says that they can cope with some bread within a mixed diet. He feeds them grain, which provides grit for their gizzards and helps their digestion.

He is very concerned that some people are now encouraging them to come out of the water and feeding them on land, partly because he doesn’t want them trying to swallow dry bread, but also because it’s making them too tame – a statement which was promptly evidenced by one of the pens coming out of the river and walking right up to us in search of food. The path there is narrow and close to the river, and is used by dog walkers, and while he was trying to shoo the swan back into the river a small terrier (fortunately being walked on a lead) lunged at her. Swans being so cumbersome on land she moved much more slowly than the terrier, and the Warden told me that it’s not uncommon for him to be called out to birds which have been killed by dogs.

The story you’ve probably heard about all British swans being the property of the Crown is largely true: the Queen retains the right to claim any unmarked mute swan swimming in open water, but two mediaeval Guilds (the Dyers and Vintners) are also allowed to own swans on the Thames. The annual Swan Upping ceremony, which historically was about divvying up the Thames swans between the Crown and the Guilds, today mainly involves counting the birds and checking their health.

The only people in the country allowed to eat swan are the Queen and (on one day in June) the Fellows of St John’s College, Cambridge. Fully-grown birds are very tough, however, so if Maj should fancy dishing up roast swan for Sunday lunch it’s recommended that she picks herself out a juvenile.

All the Stratford swans are double-ringed: they have an orange ring on one leg with their Stratford ID, and a white metal ring on the other which is their national identifier. The national rings state that they belong to the British Museum, though in fact that’s a convenience address – the national ringing scheme is organised by the British Trust for Ornithology.

So now you know!